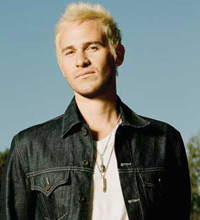 We had the pleasure of talking with Jason Wade from Lifehouse about his inspiration, the changing music industry, and how Lifehouse has evolved.

Can you tell me a little bit about the new album?

Jason Wade: It’s our 5th record. It’s the second consecutive album that we have co-produced with our producer/manager Jude Cole. We did half of it at his studio called ‘IronWorks’ and then half at the home studio I built in Agoura Hills. This record took a good year and half to make, so we definitely took our time with it.

What were the main sources of inspiration for this album?

Jason Wade: You know what… I’d have to say in the earlier days I did most of the song writing by myself, and I got to a place in my life where I felt it was necessary to go outside my box and get some outside inspiration. So we brought in some of our friends to co-write with. I co-wrote a lot of songs with Jude, who I co-wrote “You And Me” with a long time ago, so we have a chemistry that really works. I also became friends with Chris Daughtry over the last year or so, and we wrote a couple songs for this album. He actually brought in Richard Marx, who is a friend of his, to write a song – the song is called “Had Enough”. It’s just really a great pop-rock track.

So yeah, I just feel like the process for me has changed over the last couple of years. I was kinda of adamant against co-writing in the earlier days, but I’ve kinda opened up a little towards it.

How do you think you guys have evolved musically since No Name Face?

Jason Wade: This is our 5th record, and every record has been different. I don’t feel like we’ve recreated the same record twice. That’s one of the strong points we have to offer. I don’t feel like we’re content to recreate the prior record just because it was a success. Especially on this record, we felt like we needed to push ourselves to sonically try some different things, because after 10 years you start to know your own tricks and your own process. I feel like we were really hard on ourselves to come up with something that sounded like it has evolved from the earlier Lifehouse sound.

When you guys first got together I know you were a Christian band, so why the change in direction?

Jason Wade: I don’t really think there was a change in direction. I think there was a perception of us in the earlier days, because a lot of the music on the first record was spiritual. And I feel like the Christians kind of wanted to peg us as that and own us – and put us in a box. And that was never our intentions. Our intentions was to play music for everyone. We didn’t want to play music for a genre. So I don’t feel like it was a change in direction for us, I just think the perception has kinda changed. A lot of the songs we’ve come out with like “You And Me” – they’re just love songs. I feel like it’s a good thing that a lot of our music can be taken whatever way the listener wants to take it.

Out of all the songs that you’ve written, is there one that you’re the most attached to? That you feel is the most personal?

Jade Wade: For me, right not, it’s probably this song called “Broken” from our last album. Every time I play the song, I feel like it hits me on an emotional level. I wrote it in Nashville for a friend of mine who needed a kidney transplant. He really wasn’t doing well. I wrote it for him – as third person almost. Every time I play that song I feel like I’m tapping into whatever he was going through at the time.

With the evolution of the music industry, with issues about illegal downloading, what kind of effect does that have on you guys, what’s your take on it, and how has that changed your approach to marketing?

Jason Wade: I feel like there isn’t as much mystery to music anymore. That could be a good thing or a bad thing. There definitely is no seperation anymore. Your connection with your fans is like two clicks away on a phone with a Twitter or a blog. I think that’s a good thing. It’s a new music industry. You’re really connected with your fans.

I think the thing that is hard for a lot of bands is that there is a lot of free music out there. You can go on to myspace and listen to songs – and basically full albums. So it’s hard to sell records when you can get it for free everywhere. So I think that’s kind of hurt the music industry a little bit. I don’t really know what’s going to happen in the future, but I think it’s really important for bands to have that strong connection with their fans.

From a musician’s standpoint, do you find it hard to keep up with social media? To keep that line of communication open with your fans?

Jason Wade: It’s not actually that difficult. We’re kinda of new to this. When we started, you know in 2000 and 2001 there was none of this. So we’re playing catch up. Our bass player is really involved. He takes care of our Facebook page and really the whole internet side. So he’s the one we go to for advice.

What’s been your most unique fan experience?

Jason Wade: For my birthday, 4 or 5 years ago, a couple fans in Milwaukee got me a 3-toed sloth in my name [laughs]. I thought that was the strangest gift I’ve ever got from a fan.

Do you guys have a tour coming up?

Jason Wade: Yeah, we’re going to go out on the road in March for a good 3 months. We have this Vh1 cruise coming up and a couple shows in Mexico – so it’s kind of all over the place right now.

What do you guys do to kill time on the road? Any favorite television shows?

Jason Wade: Yeah, we watched a lot of ‘Entourage’ and played a lot of video games on those long drives.

Sam Raimi May Direct 'The Shadow'