Jennifer Morrison On Being The Skeptic In ‘Once Upon A Time’ 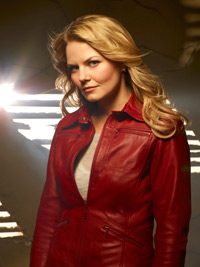 Check out our full interview with Once Upon A Time‘s Jennifer Morrison below!

How would you describe Emma Swan, your character in Once Upon A Time?

Jennifer Morrison: Emma Swan is an incredible damaged, lonely person. She has had a hard life. Emma was in and out of juvenile detention as a kid. She grew up in the foster system and she probably experienced abuse on some levels.

What is her role in society?

Jennifer Morrison: She’s not the most stand-up citizen in the country, but she’s a survivor. She’s someone who adapts to whatever she needs to survive. She will do whatever it takes to get through.

How trusting is Emma of others?

Jennifer Morrison: When we first meet Emma, she’s doesn’t trust anyone. In her experience, people are only nice to her when they want something from her. When she meets the people of Storybooke [the fictional town where the show is set], she can’t understand why they are being kind to her. She questions them, “What do you want from me? What are you going to do to me?” Clearly she hasn’t experienced anything like that in her life before.

What first drew you to this new fantasy project?

Jennifer Morrison: The writing was so phenomenal that I immediately knew I wanted to be involved with Once Upon A Time. I’ve read a lot of pilot scripts, but I don’t know if I’ve ever read a pilot script like this. It was so beautifully written and so complicated – yet it was complicated and simple at the same time.

Were you gripped from the very first page of the script?

Jennifer Morrison: I was hooked as soon as I started to read it. It’s a very character-driven story, but I don’t feel like we have any character-driven dramas on television right now, which is why it stood out from everything else I read. At the moment, every over script is a procedural. Everything is about cops or doctors. There’s nothing wrong with that, but it’s fun to be part of something different.

Why do you enjoy working on character-driven shows?

Jennifer Morrison: As an actor, it’s incredibly exciting to get a new script every week because we’re doing things that challenge us and ask us to step outside our comfort zones. The shows ask us to step up and do things that are unique and interesting and different.

Is it scary to step out of your comfort zone?

Jennifer Morrison: Yes, but it’s exciting to be scared of what you’re doing. You’ve no idea what’s going to happen to your character every week, but that’s exhilarating. Instead of getting a script and thinking, ‘I know I can do this. It’s easy, I’ve done it a million times before.’ You open the script and you think, ‘Oh, wow… Here I go!’ Every script on this show terrifies me, but in a really great way. It’s great, great fun.

Why do you enjoy being terrified?

Jennifer Morrison: Because I enjoy pushing myself. No previous script has terrified me as an actor, but it happens all the time on this show. Every week, I feel like there’s something that’s going to push me and make me better, and make me uncomfortable in a good way.

What appealed to you about the character of Emma Swan when you first read about her?

Jennifer Morrison: I was instantly interested in Emma’s vast range of emotions and her experiences. I was also intrigued by the fact that she had such a rough upbringing and the way that affects her. Emma has a strong, tough exterior and yet she’s incredibly vulnerable and soft underneath.

Is it tough for her to show the vulnerable side of her character?

Jennifer Morrison: Part of the reason why she keeps that tough exterior up is because she is afraid of revealing that part of herself – and that’s what makes her so interesting to play. There is so much to play around with when you know you’ve got a lot of depth and complications going on in someone’s life.

What other complications are going on in her life?

Jennifer Morrison: Emma has a lot of guilt in her life, mostly due to the fact that she had to give up a child when she was younger. She feels really guilty about that. She is a fascinating girl with endless possibilities, which is what makes her so exciting. One minute, she smashes someone’s face into a steering wheel; the next minute she has to drive a kid to Storybrooke. I love the fact that she’s so varied.

How would you describe Emma’s role in the story of Once Upon A Time?

Jennifer Morrison: Emma is the link between the fairytale and reality. However, when we first meet her, she isn’t in a place where she embraces that or is aware of anything going on. She’s a skeptic.

Jennifer Morrison: It was fun to have that perspective on things because it was important for there to be someone who comments on how ridiculous it all seems at the start of the season. I get to show a genuine response to what’s going on in the crazy, interesting world around her.

Do you know why the writers decided to name her Emma Swan?

Jennifer Morrison: I think [show creators] Edward Kitsis and Adam Horowitz knew what they were doing when they named her Emma Swan. They told me they thought it was a cool name and they were moved by the idea of The Ugly Duckling story, so it appeared to fit. Emma has had a really rough upbringing because she was abandoned as a child, yet she blossoms into this beautiful swan that is destined to hopefully save everyone from an evil curse.

Have you done any research into the mythology of swans?

Jennifer Morrison: I looked up the meaning of swans. I also looked into what swans have represented in different cultures and in different religions over centuries. I was amazed that there was so much written about them.

What did you discover?

Jennifer Morrison: Often, in literature and in a lot of religious references, swans are some sort of unity between divinity and humanity, which is a great fit for Emma. It’s very symbolic because she doesn’t realize she could be the link between the fairytale and reality worlds. It’s incredibly fitting for her.

How does it feel to be part of a show that’s been picked up for two seasons?

Jennifer Morrison: It feels great. I was pinching myself when I found out the news that we were picked up for Season Two. Throughout the first season, I had a lot of hope that we’d be able to return to the show for more because we had such a wonderful time shooting it. I’m thrilled that we’re all going to be back for another season. I can’t wait.

What is the atmosphere like on set in Vancouver?

Jennifer Morrison: The atmosphere is amazing. We have a cast that really gets along, so it’s been a complete pleasure. Ginnifer Goodwin is incredible, Lana Parrilla is amazing, Robert Carlyle is outstanding, and getting to watch Josh Dallas work is incredible, too. It’s like we get to go and play every day. It’s so rare that you get a job like that.

What does Vancouver add to the look of the show?

Jennifer Morrison: Vancouver is incredible. We got to film on a real mountain in a real forest with real snow, which is fantastic. There was one scene in the first season where we wanted snow and it actually only snowed for three hours that day. It was weird. It felt like it magically snowed for the scene. We couldn’t have been happier.

Once Upon A Time: The Complete First Season is now available on DVD and Blu-ray!

'Doctor Who' Review: Asylum of the Daleks

VectorRacing Review: Round And Round We Go!