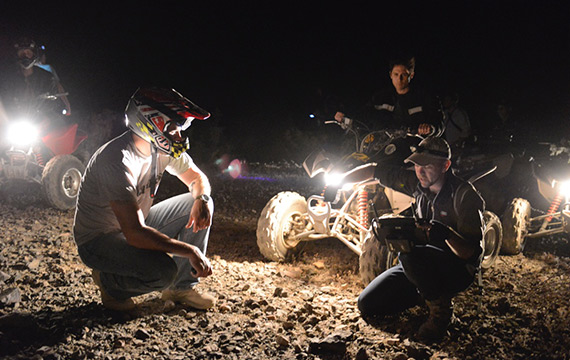 Keith Arem has over 20 years of experience working in film, music, interactive and AAA video games. He serves as the Creative Director and President of PCB Productions and was the talent director for a number of the top-grossing video games of all time (including Call of Duty: Black Ops 1 & 2 and Call of Duty: Modern Warfare 1, 2 & 3).

While Arem has quite the impressive resume in the gaming and music industry, I actually got to geek out with him over his newest venture – his first feature film, The Phoenix Incident. The film is based on the largest UFO sighting in U.S. history. The event, which took place on March 3, 1997, became known as the Phoenix Lights incident. The film was recently picked up for U.S. distribution by XLrator Media and will hit theaters in early 2016.

I had the chance to chat with Arem at Comic-Con. From The Phoenix Incident to the current state of sci-fi pop culture, he got this writer pretty excited for the film!

How did project come about for you?

The Phoenix Incident deals with the largest UFO sighting in North America, in terms of viewers and mass sightings. This was an event that obviously has been very controversial over the years because the military tries to say that these were just test flares that were out there. This is a group of lights that went from the Nevada border all the way across Flagstaff… over Phoenix and then disappeared over the mountains… When they came out and said it was test flares, it was something where test flares only last for 5 minutes and these things were in formation for hours. So, if it was a miscommunication, it was obviously something that wasn’t being discussed. Coming from working in video games for so many years, especially on Call of Duty, Ghost Recon, and all of these other big military games, we have a lot of military consultants and correspondents I work with. So we were starting to get military information saying there was a lot more to the event that wasn’t being discussed.

Did you face any backlash from the government over the film?

Keith Arem: One of our sites, we were threatened by the State Department. It was stuff where we really actually kind of getting a little scared, because we hadn’t even finished production on the film and people were already taking notice of it. A lot of law enforcement and other people had already seen what we were doing. It’s interesting, because we’d been supported privately by people in the military, but publicly they’re wanting to disassociate with it, because it is so controversial.

So are you a believer?

I think it’s really time for aliens to come back around again in pop culture. I think we go in these sci-fi loops of vampires, werewolves, ghosts, zombies, aliens – and with X-Files coming back in January… It’s perfect timing.

Keith Arem: If you think about it, our culture, between Star Wars and Star Trek and all these other films – we’ve been dealing with aliens technically for a long time, but the mainstream public doesn’t see Star Trek as dealing with aliens, they just see it as a sci-fi futuristic kind of program. I think that what’s interesting is that there’s a reality right now of what our nation has been through in the US, from 9/11 and all the different wars the U.S. has been engaged in, that has sort of brought this gritty reality of what our military has been facing, abroad and domestically. The fact that there’s a potentially much larger threat to, not just us, but to our species, that we could be provoking is kind of an unsettling idea. I think that a lot of people are starting to really realize that it’s not just the sightings that we should be paying attention to, but it’s what our own government is doing about it.

What do you hope that the UFO community will take away from the film?

Keith Arem: We want the UFO community to know that we are embracing this topic, and that we’re not just Hollywood producers who are looking to glamorize an alien attack movie – even though that’s the subject of a lot of what goes on in the film. We’re going to be going out and reaching out to the UFO community. We will be talking to them about our approach to doing this and helping bring a lot of attention to the subject matter.

Arem’s The Phoenix Incident hits theaters in March 2016. We’ll have more on the project as the release date nears – so stay tuned!