Home » Books » ‘A Clash of Kings’ Review: A Must-Own for Hardcore ‘Game of Thrones’ Fans

Are you a huge fan of A Song of Ice & Fire, the book series that Game of Thrones is based on? If so, you have probably had a rough past year in that in-between area. The Game of Thrones series is over and the next book in the A Song of Ice and Fire series (The Winds of Winter) is yet to be released with no exact date pinned down yet so where does that leave the mega-fans? Well, if you’re anything like me, that means to reread the entire series to get a refresh before the next book is released. Well, you’re in luck – The Folio Society is releasing the series in a very special illustrated collector’s edition. So far they have released A Game of Thrones and now they are releasing A Clash of Kings. I was lucky enough to receive a copy of A Clash of Kings and let me tell you, it is amazing! 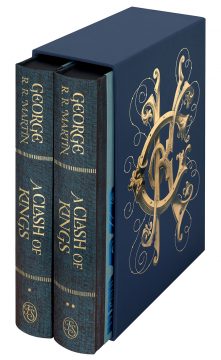 A Clash of Kings Review:

It’s likely you have already seen the Game of Thrones series and probably even read the books but if not, please skip to the next paragraph. A Clash of Kings is one of the more action-packed books in the series. The War of the Five Kings takes place with brothers Stannis and Renly Baratheon fighting to take the throne away from King Joffrey, until Stannis kills Renly using dark magic. Rob is named King of the North and also takes on King Joffrey while Balon Greyjoy claims himself king and starts raiding the kingdom. Needless to say, a lot of fighting happens. Arya is introduced to the faceless man Jaqen H’ghar who saves her life by, and thus introducing her to, his amazing assassin skills. Tywin Lannister saves King’s Landing from Stannis and is nearly killed in the process. Meanwhile, Jon Snow goes undercover amongst the wildlings/free folk and meets the “King Beyond the Wall” Mance Rayder. All the while, Daenerys Targaryen survives an attempt to steal her dragons and keep her prisoner by warlocks and finally sets sail for her new kingdom. This book has so much it’s hard to cover in just a paragraph, but needless to say it is full of action, intrigue, magic, and actually makes politics very interesting. 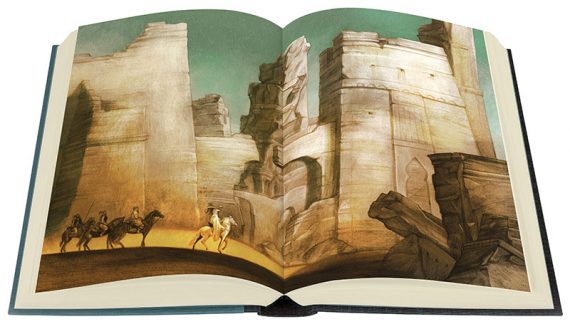 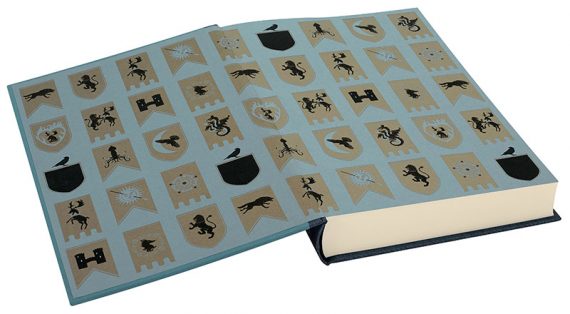 The quality of this book (actually, it’s a set of two books) is amazing. It’s a great addition to any bookshelf and, unlike some other versions, isn’t a pretty easy read. Expanding the book into two separate books might seem cumbersome but it’s actually a lot easier on the eyes. The books itself is quite lovely. With a cloth-bound cover it looks more luxurious than any previous versions. The printing is in a crisp, clean gold and black font that is extremely nice looking. The overall quality is very high. This isn’t like the “classic style” books you might buy at the bookstore for $10. It has quality materials and binding that is meant to last and is clearly a collector’s item. The book also has tons of extra goodies. It has updated family trees updated from the first edition to include events from the first book (Folio Society has previously released A Game of Thrones) and “The Kings and Their Courts” which gives a lot more detail about the characters in the story (you will be shocked when you realize how many “key” players there are in the story. The Baratheons, in particular, get a great write-up.

What really makes this printing of A Clash of Kings is all of the amazing art and illustrations that are found within (actually, not only within). The Folio Society commissioned artist Jonathan Burton to do the art for this release and one great thing that I personally love about it is that he has never seen the television series. He came in without any preconceived ideas or biases. This particular installation includes 16 full-color illustrations including four double-page spreads of some of the most iconic moments of the story. Renly Baratheon and Brienne’s together in a final moment together is impactful and Arya freeing Jaqen H’ghar makes for a really nice tone along with the text. It also sports some very artistic house sigils and chapter headings. My favorite artwork is that of Melisandre, including one very cool one outside of the book. Almost a bonus or secret piece of artwork.

Overall, this is a very high-end piece of art and a collectible for those hardcore fans of the book and television series. It looks wonderful on the shelf and even when not reading it, it’s really cool to pick up and thumb through the artwork. It instantly takes you away with its illustrations. You can order a copy of A Clash of Kings from the link below (also on the site is the first book, A Game of Thrones.) The plan is to release collector’s editions for all the novels in A Song of Ice and Fire—assuming George RR Martin gets them completed. Come on George – we’re waiting for the story and they will definitely deserve an illustrated edition to join these.

A Clash of Kings Review Overall:

You can order A Clash of Kings here: https://www.foliosociety.com/usa/a-clash-of-kings.html?utm_source=fanbolt&utm_medium=pr&utm_campaign=clash_of_kings&utm_content=review

And here’s where you can learn more about the book:

'A Clash of Kings' Review: A Must-Own for Hardcore 'Game of Thrones' Fans