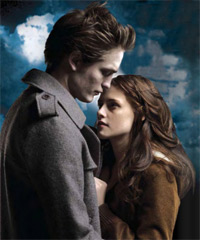 Robert Pattinson and Kristen Stewart will be turning up the heat for Breaking Dawn. Rumors have surfaced that the two Twilight stars have pushed for tasteful but more sexually charged scenes, but word from the set is that Pattinson and Stewart’s vision is that of director Bill Condon.

According to E! Online, Breaking Dawn will require more nudity than the previous Twilight films. Condon is known for pushing the boundaries, and that’s exactly what sources say he’s doing with the PG-13 film. Maintaining the tween audience is still “key” according to a source from the studio, so fans will not be getting the nudity they’re probably crossing their fingers for.

Condon is also known for shooting more material than is needed, so he’ll have what he needs for the editing room, which could very well be the source of these sexy rumors!

How awesome would a “R” rated DVD release be for Breaking Dawn? A special edition for older fans who don’t fit into that tween bracket? Do you think it would hurt sales or the brand? Or be a hit? Sound off below in our comments with your thoughts!