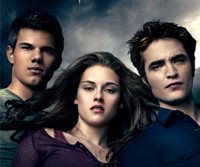 Robert Pattinson and Kristen Stewart have reportedly already started filming the final scene from Breaking Dawn. The final installment in the Twilight saga will be broken into two films, and even though filming just recently began on the first film, sources are saying the final scene is already being filmed.

Last week, Dakota Fanning was spotted in Louisiana filming the finale scene. Fanning plays Volturi vampire Jane, and fans of the Twilight series know that the Volturi don’t show up until the epic ending of Breaking Dawn!

Movies film out of order all the time, so it makes since that production would work with the actors’ schedules to get the scenes shot in the most efficient way possible. We’ve got our fingers crossed that some more pictures will leak from the set… We’re dying to see Renesmee, and we’re pretty sure that Twilight fans feel the same way! Right? Sound off below in our comments!

Former 'Friends' Star David Schwimmer Is Going To Be A Dad