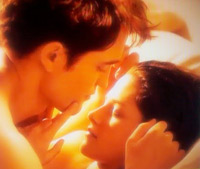 Fans are getting a look at Robert Pattinson and Kristen Stewart in Breaking Dawn‘s most anticipated scene in the newest issue of Entertainment Weekly. The magazine features an image from the much talked about honeymoon scene.

The first installment of Breaking Dawn (which is being split into two films) will feature Stewart and Pattinson’s characters Bella and Edward taking to their marital bed for the first time. Director Bill Condon commented on the scene saying, “It is one of the most anticipated scenes, and I spent a tremendous amount of time thinking about it. You want to play with what people expect and maybe subvert it a little and surprise them.”

The final Twilight installment Breaking Dawn is nearing the end of filming, and it’s already a feeling being felt by the cast and crew on set. “There’s this bittersweet feeling that’s already beginning.” Condon revealed, “There’s a real sense of wanting to go out on a high note.”

And we’re sure they’ll go out on a high note! What do you guys think of the newly released image? Do you guys think it’s as sexy as we do? Sound off below in our comments section!

Katy Perry Took Her Grandmother To Vegas For Her 90th Birthday