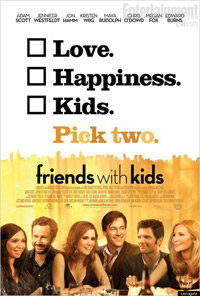 Friends With Kids, John Carter and more hit theaters this weekend! We’ve got the full breakdown for you below!

A Thousand Words (PG-13), Comedy – A fast-talking literary agent has set his sights on New Age guru for his own selfish purposes. But his life comes unglued after a magical Bodhi tree mysteriously appears in his backyard and with every word he speaks, a leaf falls from the tree and he realizes that when the last leaf falls, both he and the tree are toast. Stars Eddie Murphy, Allison Janney and Cliff Curtis.

Apart (NR), Drama – The journey of the tragically star-crossed Noah and Emily who are linked by a rare psychological disorder classified as ICD-10 F24, madness of two. Stars Olesya Rulin and Josh Danziger.

Footnote (PG), Drama – Follows a great rivalry between a father and his son, their need for each other and their need for respect and recognition in the world. Star Schlomo Bar Aba and Lior Ashkenazi.

Friends with Kids (R), Comedy – The project revolves around a pair of thirty something best friends who observe the toll that having kids has taken on the couples they know and resolve to bypass that stress by having a child and then date other people. Stars Adam Scott, Jennifer Westfeldt, Kristen Wiig, and Jon Hamm.

Jiro Dreams of Sushi (PG), Documentary – The story of 85 year-old Jiro Ono, considered by many to be the world’s greatest sushi chef. Jiro has been mastering the art of making sushi, but even at his age he sees himself still striving for perfection, working from sunrise to well beyond sunset to taste every piece of fish; meticulously train his employees; and carefully mold and finesse the impeccable presentation of each sushi creation. At the heart of this story is Jiro’s relationship with his eldest son Yoshikazu, the worthy heir to Jiro’s legacy, who is unable to live up to his full potential in his father’s shadow.

John Carter (PG-13), Action-Adventure – A war-weary, former military captain is inexplicably transported to Mars where he becomes reluctantly embroiled in a conflict of epic proportions amongst the inhabitants of the planet. In a world on the brink of collapse, he rediscovers his humanity when he realizes that survival a people rests in his hands. Stars Taylor Kitsch, Lynn Collins, and Willem Dafoe.

Playback (R), Horror – While digging into their town’s infamous past, a group of high school students unwittingly unlock an even darker secret. Now, an evil spirit has been awakened and will stop at nothing to find his true heir. Stars Johnny Pacar, Brooke Smith, and Alessandra Torresani.

Salmon Fishing in Yemen (NR), Comedy – When Britain’s leading fisheries expert is approached by a consultant to help realize a sheikh’s vision of bringing the sport of fly-fishing to the desert; he immediately thinks the project is both absurd and unachievable. But when the Prime Minister’s overzealous press secretary latches on to it as a “good will” story, this unlikely team will put it all on the line and embark on an upstream journey of faith and fish to prove the impossible, possible. Stars Ewan McGregor, Kristin Scott Thomas, and Emily Blunt.

Sound of Noise (R), Comedy – A police officer born into a musical family with a long history of famous musicians, ironically, hates music. His life is thrown into chaos when a band of crazy musicians decides to perform a musical apocalypse using the city as their orchestra and he reluctantly embarks on his first musical investigation.

The Decoy Bride (NR), Comedy – When the world’s media descend on the remote Scottish island where a Hollywood actress is attempting to get married, a local girl is hired as a decoy bride to put the paparazzi off the scent. Stars David Tennant, Alice Eve, and Kelly MacDonald.

Netflix May Save 'Terra Nova'