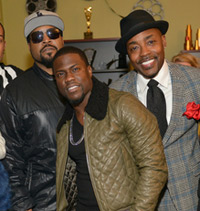 Last night may have been a cold one, but that didn’t stop the stars from coming out for the Atlanta premiere of Ride Along. Kevin Hart and Ice Cube, the film’s stars, were joined by the film’s producer, Will Packer, along with Ludacris, Monica, T.I. and Tiny, stars of Love and Hip Hop Atlanta and more showed in support of the premiere.

FanBolt was able to attend the event last night as well, and we have a number of highlights to share with you all below!

For more event photos, check out our Facebook Gallery!

Ride Along filmed in Atlanta early last year and will open nationwide on Friday, January 17th.

Showtime Cancels 'Californication,' Seventh Season Will Be The Last