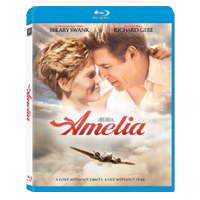 Director Mira Nair has been working hard for two decades, putting out almost two dozen pictures, some which have netted her critical acclaim. She’s responsible for creating “The Perez Family,” “Monsoon Wedding,” “Vanity Fair,” and a segment of “New York, I Love You” just to name a few. She’s not afraid to take on foreign projects, and has a way to naturally lure people’s interests in alternate directions.

People don’t always remember each and every person who’s accomplished something. It’s often times hard, however, to forget the first. When you think of aviation and how far we’ve come, it’s hard to believe everything that’s been done in close to eighty years. Starting from men jumping off cliffs, with wooden wings strapped to their arms, spanning all the way to outer space travel. When you think of women’s contributions to aviation, one name and one name only pops into your mind; Amelia Earhart. This is the story of the events that lead up to her disappearance, as she attempted to circumnavigate the entire world. What happened to her is still a mystery to this day, but there are many speculations floating through our history books. Earheart, with her roots stemming from Kansas, discovered her love for aviation at age twenty-three. When she reached thirty-five, she was given the Distinguished Flying Cross for being the first woman to fly a plane solo, across the Atlantic Ocean. The pressure from gender criticism, and political views didn’t affect her like they would most other people. The only point she had to prove was to herself. She felt like she was the only person who stood in her way. Though the mystery of where Earhart ended up may never be discovered, her accomplishments and burning passion for what she loved were very well known.

Biographical based films aren’t for everyone. Usually history buffs are the ones who enjoy them the most. After a few weeks of hearing customers tear “Amelia” down to size, I finally had the chance to view it for myself. It wasn’t bad for what it was. It didn’t carry much excitement, but stuck fairly close to the facts that history knows as true. Earhart (Hilary Swank) was definitely a passion filled woman. Her love for the sky was what motivated her. It didn’t hurt that she had a loving man named George Putnam (Richard Gere) as her promoter, and husband. Still of course, that wasn’t enough for her, and her eyes strayed to a handsome Gene Vidal (Ewan McGregor). Even though her love affair was brief, Putnam never gave up on Amelia. He backed her with all his heart and pocketbook. They worked together to make sure her flying career could “take off.” Miss Earheart wasn’t perfect. Her eagerness sometimes gave way to mistakes that could have been avoided. You can’t succeed, however, without trial and error. Even though I’m not a fan personally, of Hilary Swank, I don’t believe they could have casted Amelia any better. Richard Gere once again has been type cast into one of those pushover roles where he gets cheated on and keeps coming back with the puppy dog eyes and open heart. I guess if that’s what he does well, keep on doing it Richie. The best thing that this movie had for it was its cinematography. The landscapes and setting all had a vintage taint to them, that looked very appealing. “Amelia” didn’t pack a lot of excitement, just a factual based saga of one of the world’s most famous women, and her journey to succeed. Not a bad film, just not one that jumps off video store shelves.