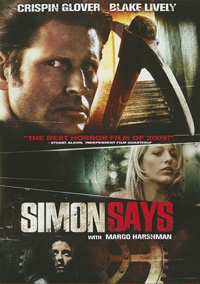 Setting out for a great spring break vacation in the woods, five teens, including Jenny (Blake Lively, TV’s Gossip Girl, The Sisterhood of the Traveling Pants 1 & 2), run into local twins Simon and Stanley (Crispin Glover in a dual role, Back to the Future, Willard, Beowulf, Tim Burton’s upcoming Alice in Wonderland), who recommend a beautiful lakeside campsite. But when one of the friends mysteriously disappears, the others believe they’ve made a grave mistake.

Soon a series of fiendish woodland-man-traps – including one involving death by monster-sized reefer followed by incineration – start picking off the teens. Kate (Margo Harshman, Fired Up, TV’s Run of the House), manages to escape but ultimately becomes a captive of the sadistic Simon, who goes solo after dispatching his brother in equally gruesome fashion.

Will the next group of tourists learn to play by Simon’s rules or will the penalty for forgetting to say Simon Says be death for all?

Review:
You know the story – 5 friends enter the woods looking for the perfect place to camp – then all hell breaks loose. Except here, twins are involved. That’s right, the gang crosses paths with psychotic twin brothers Simon and Stanley who come up with some pretty creative and horribly gruesome ways of X’ing off the campers.

As fun as Evil Dead 2? That’s what the back of the box says, and it’s partially accurate if you like crappy slasher horror flicks. But it still misses out on that classic element of awesomeness that Sam Raimi seems to have in his films.

The horrible acting, the corny dialogue, and absolutely no originality make for a rather predictable film and a rather disappointing experience. If you’re a fan of the 80’s horror film genre and you have nothing else to watch, then give this one a try – just don’t expect too much. And if you’re not a fan of this style of movies – you’ll wish you were the one getting X’ed off.