DVD Review: Marley And Me 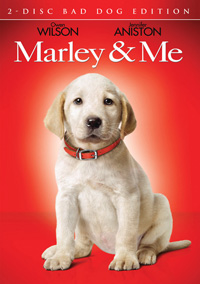 Packed with playful special features, including tons of deleted scenes and irresistible featurettes, Marley & Me is a satisfying treat for the whole family! Jennifer Aniston and Owen Wilson unleash huge laughs as John and Jenny Grogan, a young couple contemplating the decision to have a baby. Then came Marley… an adorable Labrador pup who flunks obedience school and quickly turns his new home into a disaster area. But as mischievous Marley sees the Grogans through the ups and downs of life and love, they ultimately realize that “the world’s worst dog” truly brings out the best in them.

Review:
Marley and Me takes a heartfelt look at the evolution of a couple, John (Owen Wilson) and Jenny Grogan (Jennifer Aniston) from being newlyweds, to new careers, to becoming parents, all while having an adorable little Labrador pup named Marley. From day 1, Marley is not your average pup. Being sold at $75 less than the other puppies in the litter, Marley instantly earns the nickname “clearance puppy.” He is seemingly untrainable and manages to flunk obedience school where it is demanded that he never return. Through all the disasters of running away with shoes, tearing up furniture, and numerous other hysterical ‘because he’s not our dog’ events – Marley sees the ups and downs of the Grogans in their personal lifes, in love, and in their careers. And in return, the Grogans realize that “the world’s worst dog” might actually bring out the best in them.

Hearing rumors of the ending, I was reluctant to watch this film since I’m a huge animal lover. The moments of laughter and awing soon had me glad that I had popped this one into the DVD player though. Owen Wilson has his usual sarcastic lines and Jennifer Aniston brings her perfect comedic timing and adorableness back that we came to know her for as Rachel on Friends. My favorite character, though, was Arnie Klein played by Academy Award-winning Alan Arkin. Akrin, hands down, gets the best lines in the film, and while having a small role, instantly becomes a crowd favorite.

As the end of the film draws near, the humor slips away and the story takes a more serious tone. You know what’s coming, and if you fear that your floodgates are about to break, then 25 minutes from the end, it might be best to switch to the special features. The Blu-ray release offers a nice set of extras including: an exclusive Dog Training Trivia Track, Dog Training 101 with BonusView video, 19 deleted scenes, director commentary, gag reel, and various adorable and entertaining featurettes . The Blu-ray also comes with a digital copy of the film and a standard DVD for non-Blu-ray players which makes it a great set to buy if you’re planning to switch over to Blu-ray, but just haven’t been able to yet.

If you’re a dog lover, it’s a must. If you’re an uber-sensitive dog owner, take my advice about checking out the special features a little bit earlier!

Grade: B+
Official site: http://www.marleyandmemovie.com/
Buy on Amazon: Marley And Me

Has Reaper Become the Reaped?