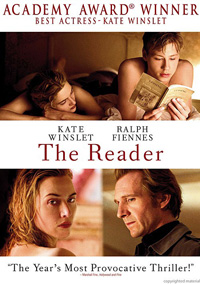 A mysterious older woman in post-World War II Germany has an elicit summertime affair with an young local boy, who is later forced to decide how far he’ll go to protect her secret in the thrilling Best Picture Oscar nominee THE READER, debuting on DVD April 14th and Blu-Ray Disc April 28th from Genius Products and The Weinstein Company. With five previous Oscar nominations, Kate Winslet (Revolutionary Road, Little Children) takes home her long-awaited first statuette for this “fierce, unerring portrayal” (Peter Travers, Rolling Stone) of the woman who falls for a teenager, leading a trio of powerful and “impeccable performances” (Jeffrey Lyons, NBC Reel Talk) that also includes two-time Oscar nominee Ralph Fiennes (Schindler’s List, The English Patient) and standout German newcomer David Kross. Based on the New York Times bestselling novel, THE READER has been heralded as “one of the most uplifting movie experiences of your life… a masterpiece” (New York Observer).

Review:
The Reader was one of the top players this year at the Academy Awards, and it’s not hard to see why with such a powerful and emotional script alongside the absolutely stellar performance by Kate Winslet. The film is based on the internationally celebrated novel which tells the story of Hanna Schmitz (Kate Winslet), a working-class woman, who has an intense summer-long affair with a 15 year-old Michael Berg (David Kross). The affair has a profound impact on Michael that Hanna never really acknowledges and her exit from his life leaves him unsure of where to go from there. Years later, Michael is in law school and is attending a Nazi war crimes trial with his professor and classmates. The defendants include five female former S.S. concentration camp guards. Catching him completely by surprise is one of the defendants, Hanna. Michael sits by and watches as Hanna takes more than her fair share of the blame while he holds a secret of Hanna’s that could be her very salvation.

Kate Winslet took home the award for Best Actress, and it’s not hard to see why with a performance that is so emotional, erotic, and troubled. Her portrayal of Hanna Schmitz far outshined the rest of the cast, but it should be noted that David Kross (the younger Michael Berg) also delivers a fabulous performance for someone his age. Younger Michael Berg also has a series of character flaws that can be irritating to the viewer, but it doesn’t really hit you until the film switches gears to focus on older Michael Berg (Ralph Fiennes). I honestly think Ralph Fiennes is incapable of taking on a role that doesn’t have some sort of weakness to it that utterly makes you hate the character and yell continuously at your TV for him to grow a pair. It was much the same reaction I had to his character in The Duchess.

Special features on the Blu-ray release include deleted scenes and a number of featurettes including: Kate Winselt talking about the aging of her character and a look at the adaptation of the masterpiece for film.

Grade: A-
Official site: http://www.thereader-movie.com/
Buy on Amazon: The Reader

Members of Gomez, Phantom Planet And Maroon 5 Team Up For Operation Aloha

North American Dates Announced For Beyonce's "I Am" Tour