Can you imagine a comic that is inspired by the 1993 action-horror children’s show Mighty Max, superhero comics, and Lovecraft? It exists and it’s called Arcane. Essentially, Arcane is a horror comic surrounding Hogan, a teenager who moves back to his dad’s hometown. His home life is tough and this move has really turned his life on its head. We start our story with Hogan who has lost a large chunk of his memory, holding a mysterious necklace and getting help from a mysterious person named Joseph Aucoin. We learn about this new ‘world’ along with Hogan and join him on a journey of world and self-discovery. There are zombie-like creatures called stitchers and multiple planes of reality, what else could you ask for?

Who is the mind behind Arcane? This comic has been in the works from the creative mind of Steele Filipek for decades. You may know Steele from his role at Starlight Runner as the Executive Editor & Lead Transmedia Producer or maybe his work on a wide array of projects ranging from Men in Black to the Amazing Spiderman. He has written comics, screenplays, podcasts, and so much more.

He started working on Arcane way back in the 90s with a few basic sketches. It was originally titled The Dark, but once he discovered there was a similarly named comic The Darkness, he then changed the title to Twilight, then (for obvious reasons) changed it again until he settled on Arcane.  Steele also originally planned for this comic to be a comedic superhero story. This may be why it took so long to get the ball rolling on Arcane but once he let go of the pressure of making everything funny, he was able to continue with the creation of this story. Instead, he made a Lovecraftian adventure with the occasional laugh. The story is now more horror-filled with characters and locations inspired by Steele’s past. 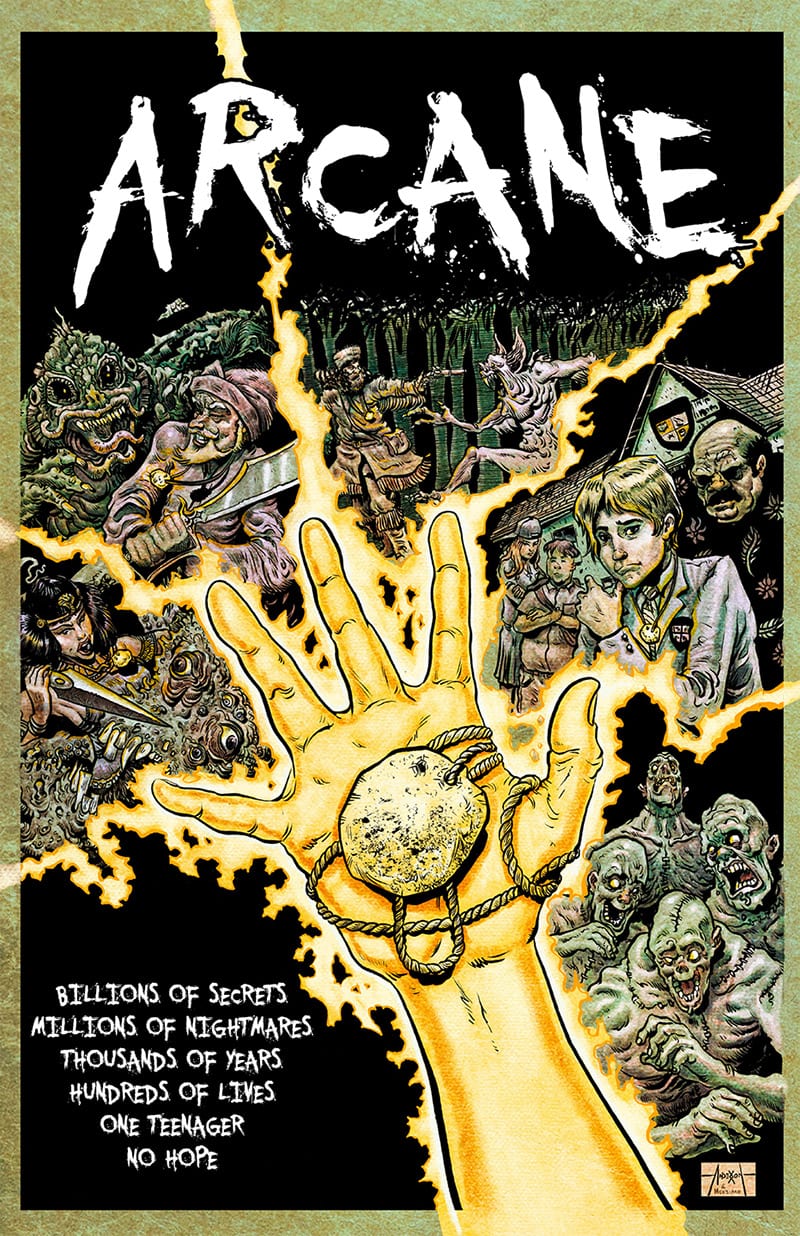 Another compelling aspect of the comic is the artwork created by Mac Radwanski. His art has an “old-school noir-adventure comic book” feel that captured Steele’s attention and what led them to collaborate. Steele’s choice for Mac was inspired by his admiration of Phil Hester’s and Sal Buscema’s work. Once Mac joined the team, they were able to get in the swing of things. Steele sends the script to Mac and Mac works on the thumbnail layouts and sends it back to Steele for feedback. They do this one page at a time for every issue. As a result, we got a well-written and beautifully drawn adventure, and Mac says that “working on Arcane with Steel Filipek was one of [his] best experiences.”

However, there are more people behind this comic. We can’t forget Ben Granoff, who has been working as a New York-based cartoonist for more than 20-years. His work has appeared in well-known places like the permanent collection at the Rubin Museum of Art. For Arcane, he was in charge of the tones. And, finally, there is the publisher behind the comic, Cosmic Lion Production (CLP). CLP is headed by Eli Schwab, a long-time comic creator, who couldn’t wait to bring Arcane to readers.

If you love a good adventure with a bit of horror and intriguing characters, then be sure to check out the Cosmic Lion-produced comic in print and digitally on August 18th.

Dennis
Dennis is currently a senior at NYU, he is majoring in Psychology and Journalism with a focus in clinical psychology and digital/broadcast journalism. He spends most of his time bingeing the latest tv shows but if he’s not doing that then he’s writing about the latest in entertainment news.