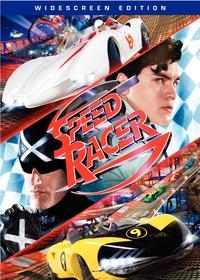 Start your engines and fasten your seatbelts for the high-octane adventure Speed Racer, combining heartfelt family humor and groundbreaking visual effects. Speed Racer (Emile Hirsch) is a natural behind the wheel of his thunderous Mach 5. With support from Pops and Mom Racer (John Goodman and Susan Sarandon), girlfriend Trixie (Christina Ricci), younger brother Spritle (Paulie Litt) and the mysterious Racer X (Matthew Fox), Speed takes on fierce competitors to save his family’s business and protect the sport he loves. When Speed steps onto the track, its not just a race. Its an adrenaline-fueled, high-speed charge to the finish. Go, Speed Racer, go!!

Review:
Andy and Larry Wachowski are the brother pair that brought the three Matrix movies and V for Vendetta to the big screen. They chose to once again step outside the box and bring animation and real time film action together in one of the first true hybrid movies of its kind.

If you don’t already know the cartoon and comic legend Speed Racer, he has a tale that barely needs any introduction. He helms from a family that only knows one word: racing. His brother was his hero until one tragic day; ever since he’s wanted to keep his name in the spotlight by living in his legendary shadow. Unfortunately, there are darker forces at work that just may stand in the way of Speed gaining his ultimate prize.

I had very low expectations for this movie because it looked like such a video game in the previews. I put it in to watch early in the morning figuring I’d return to la-la land, but instead it did indeed keep me awake and I somewhat enjoyed it. It is obviously more family-oriented. It doesn’t have too much violence or adult material, but I still appreciated what I saw. I can be honest and tell you that I don’t care for the guy who played Speed (Hirsch), but it still didn’t ruin the outcome. This would be a good movie for family night, or to test out any new high definition entertainment centers you may have purchased recently as the Blu-ray version looks incredible. This is how this film is meant to be watched.

There is also a bonus disc on the Blu-ray release that includes the Speed Racer Crucible Challenge which is definitely work popping in after you finish the film.

Jolie & Pitt On The Move To Germany