How to Watch the Harry Potter Movies In Order

Entering the World of Harry Potter

Call me a purist, but before watching the Harry Potter films, you absolutely must read the books first.

No matter how you choose to watch the Harry Potter movies in order, you need to enjoy the original text by J.K. Rowling that brought the characters to life. You can only fit so much plot and character development into a two-and-a-half-hour movie as opposed to a book that is hundreds of pages long.

Literature and film are two very different mediums that give their creators the power to accomplish different things. Even if the films were word-for-word reproductions of the book, they would still bring something new to the table, as it’s a visual and auditory medium.

The movies give us an immersive view into the world of Harry Potter, but first, we need to build that world from the ground up in our imaginations. Then we can fill in the missing subtext that allows us to enjoy the movies even more.

You can buy hard copies of the Harry Potter book series practically anywhere books are sold, or if you’re an auditory learner, you can enjoy the original Jim Dale recordings on Audible. His version is widely considered the best audiobook adaptation.

The Harry Potter Movies In Order of Release Date 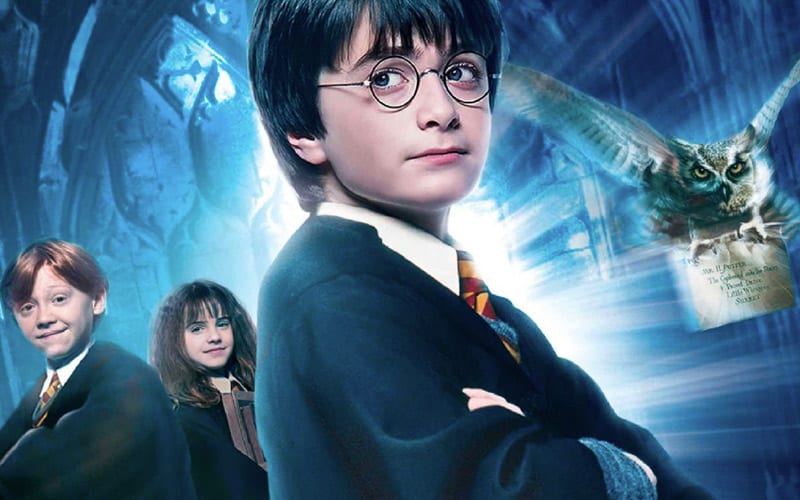 Where It All Began: Harry Potter and the Sorcerer’s Stone

Chronologically speaking, Fantastic Beasts and Where to Find Them takes place years before Harry Potter gets his Hogwarts letter. However, if you don’t get the foundations of the wizarding world and start at the beginning of the franchise, you’ll probably get a little lost in Newt Scamander’s romps around 1926 NYC.

You’ll discover the world along with Harry (played by Daniel Radcliffe); growing up with his Muggle (non-magic) aunt and uncle, he knows nothing of wands and witchcraft. You get introduced into the wizarding world at the same pace as the Boy Who Lived.

This movie has charm because it’s the first time we ever get to see what the Hogwarts School of Witchcraft and Wizardry looks like, hear the rushing air in your ears when you ride a broom, and can almost taste what Bertie Bott’s Every Flavor Beans taste like.

Not that you’d necessarily want to experience the taste of earwax.

A Stunning Sequel: Harry Potter and the Chamber of Secrets

The Chamber of Secrets continues the successful tone of the Sorcerer’s Stone. As a result, we learn more about the wizarding world and uncover more about The Dark Lord.

Harry outwitted him once, but will he succeed again?

Unfortunately, it is the last film with Richard Harris, the original Albus Dumbledore. He tragically passed from Hodgkin’s lymphoma before they started filming number three. He perfectly encompassed the sweet, thoughtful, pensive Dumbledore we see in the first few books.

As the series gets darker, Dumbledore becomes a more complicated figure. We’ll never get to see how he would have approached the increased complexity of the role.

We Take a Darker Turn: Harry Potter and the Prisoner of Azkaban

While films one and two have a charming, child-like delight of exploration, you start to discover in film three that there is darkness in this world of magic. Alfonso Cuaron directs the film and it has a decidedly different feel from the other films.

It’s the reason why some consider this their favorite. Others prefer different films with a different director’s vision.

A dark wizard – one of Voldemort’s right-hand men – escapes Azkaban. Azkaban is a terrifying place, guarded by dementors: creatures that suck out your soul and make you relive your darkest memories.

Azkaban is the wizarding equivalent of Alcatraz, which is why it’s so terrifying when this man escapes the prison.

His reported motivation for escaping? Finding and ending The Boy Who Lived.

The Wizarding World Expands: Harry Potter and the Goblet of Fire

With movie number four, we discover that Hogwarts is not the only wizarding school. Beauxbatons and Durmstrang, two rival schools, attend Hogwarts for the year so they can compete in the Triwizard Tournament.

We get to see a Quidditch World Cup, which becomes the site of a dark wizard congregation. While the trio tries to experience the tournament and just pass their classes, they must battle against an unspeakable evil by the end of the film.

The Dark Lord Returns: Harry Potter and the Order of the Phoenix

While the threat of Voldemort has loomed over the series thus far, He Who Must Not Be Named comes to full power at the end of book four. And the government refuses to believe it.

The Ministry of Magic – the Wizarding government – starts to play a larger role as well. And they don’t like that Harry is causing fear amongst the wizarding community by saying Voldemort is back.

The Last Year at Hogwarts: Harry Potter and the Half Blood Prince

Wizarding school is traditionally finished in seven years, but this is the last year that Harry, Ron, and Hermione will attend Hogwarts as students.

Harry starts to learn from Dumbledore about the quest he must complete to defeat Voldemort.

He dives into the past with Dumbledore to discover more about Voldemort’s origins as Tom Riddle. Will that unlock the key to his defeat?

Hunting for Horcruxes: Harry Potter and the Deathly Hallows Part 1

The way to defeat Voldemort is through destroying his horcruxes. In his attempt to gain eternal life, he splits his soul into pieces and keeps them safe in various, practically impenetrable artifacts.

So how are Harry, Ron, and Hermione going to find seemingly random objects, destroy them, all while the government and the Death Eaters (who have become essentially the same thing) hunt them down?

The Battle of Hogwarts: Harry Potter and the Deathly Hallows 2

All of the trials Harry and his friends have had to overcome over the past six years will open at the close in this final film.

In conclusion, we get answers to every unanswered question we’ve collected over the course of the series. Not only do we have a satisfying conclusion. But we also get an adorable epilogue of what happens Nineteen Years Later.

Beyond the Original Books

If the original series isn’t enough for you, there’s more to explore!

One of the wizarding textbooks, Fantastic Beasts and Where to Find Them gets turned into its own prequel film series. It started with Fantastic Beasts, has a sequel called The Crimes of Grindelwald, and the third film The Secrets of Dumbledore will be released in 2022.

If you want to know what happens after the epilogue in the final book, check out The Cursed Child. It’s a Broadway play that explores the world of Harry Potter in yet another medium: the stage.

Harry Potter Movies In Order Of When They Were Set

Fantastic Beasts 3: The Secrets of Dumbledore will likely be set right after the second Fantastic Beasts (1927), so it should fall into the order before the events of Sorcerer’s Stone.

Get Started Watching the Harry Potter Movies In Order

Ready to start? If you can’t wait one more second to watch the Harry Potter movies in order to fall in love with the Wizarding World, your best bet is to head over to HBO Max or Peacock. They currently are the two streaming services that are home to all the original Warner Bros. 1-8 films.

Unfortunately, Fantastic Beasts and Crimes of Grindelwald are only available to rent, watch on syndicated TV, or get by joining Sling TV. At $35 a month after the first month, your best bet is just to buy the movies outright if you plan to watch them again and again.

And if you don’t want to shell out hundreds of dollars for a trip to NYC for two Broadway shows, you can much more easily enjoy Cursed Child at home by reading the book of the screenplay. You know what they say: reading is the best source of magic.

Do you love the Harry Potter universe? Share with us your love of the fandom in our comment section below!

Note: As an Amazon Associate, we earn from qualifying purchases on Amazon affiliate links.

How to Watch All of the Harry Potter Movies In Order