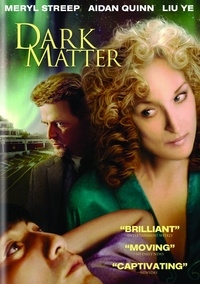 The feature film debut of renowned opera and theater director Chen Shi-Zheng, Dark Matter delves into the world of Liu Xing (Chinese for “Shooting Star”), a Chinese science student pursuing a Ph.D. in the United States in the early 1990s. Driven by ambition, yet unable to navigate academic politics, Liu Xing is inexorably pushed to the margins of American life, until he loses his way.

Liu Xing (Liu Ye) arrives at a big Western university with plans to study the origins of the universe. At first, his experience is a heady rush of expectation and optimism. He finds other Chinese students to share a cheap apartment with him, and flirts with an attractive American girl who works in a local tea shop. When the head of the department, Jacob Reiser (Aidan Quinn), welcomes Liu Xing into his select cosmology group, it seems that only hard work stands between him and a bright future in American science. At an orientation for foreigners sponsored by a local church, Joanna Silver (Meryl Streep), a wealthy patron of the university, notices the earnest student. An unspoken bond forms between them.

Liu Xing becomes Reiser’s protege, accompanying him to a prestigious conference where he makes an impressive debut. He is drawn to the study of dark matter, an unseen substance that shapes the universe, but it soon becomes clear that his developing theories threaten Reiser’s conflicting theories and well-established studies. Excited by the possibility of a breakthrough, Liu Xing is deaf to warnings that he must first pay his dues. When he is eclipsed within the department by Laurence, a more dutiful Chinese student, Liu Xing is forced to go behind Reiser’s back to publish his discoveries. When the article draws ire instead of accolades, he turns to Joanna, who naively encourages him on his collision course.

Liu Xing clings to the idea of American science as a free market of ideas, and American society as wide open to immigrants. But in the end, his dissertation is rejected, and the girl in the tea shop brushes him off. His roommates find jobs, leaving him behind. Too proud to accept help from Joanna, and unwilling to return home to his parents, Liu Xing becomes a ghost-like presence at the university. Left alone with his shattered dreams, he explodes in a final act of violence.

Inspired by actual events, Dark Matter was written by Billy Shebar with a story by Shebar and Chen Shi-Zheng. The film was financed by American Sterling Productions, and produced by Janet Yang of American Sterling Productions and Mary Salter and Andrea Miller of Saltmill LLC. Kirk D’Amico and Linda Chiu are executive producers. Dark Matter was the Alfred P. Sloan prize winner at the 2007 Sundance Film Festival.

Review:
Dark Matter is a haunting film based off actual events that occurred at the University of Iowa in 1991. Loosely inspired by the true story of Gang Lu, a Chinese physics student, Dark Matter tells the story of Ph.D. student Liu Xing who is driven by his love of science. In the beginning, good fortune becomes him. He’s learning about what he loves, has a mentor who he looks up to, and even finds himself dazed by a blonde hair, blue-eyed American girl.

As Xing’s time at the University unfolds, he finds himself obsessed with the study of dark matter; an unseen substance that he believes shapes the universe. The theory that he has proposed conflicts with the model of his mentor, Jacob Reiser. Reiser urges him to let it go and move on, but Xing refuses to do so. This is just the beginning of a painful and torturous ride for the young student. When his dissertation is rejected and the blonde hair, blue-eyed girl refuses his advances as well, Xing finds himself at a breaking point. Recounting on his broken dreams through various flashbacks throughout the film, he is on the edge of a “big bang” himself.

The most aggravating element of this film is that it has so much potential, but the unorganized flashbacks and the lacking script leave you on the verge of greatness for the majority of the film. The acting is all quite good, but I have to admit as a huge fan of Meryl Streep, it was hard for me to watch her in this role. She just didn’t seem to fit into this story. Her character seemed disconnected from the focus of the film, and while her acting was of course top-notch, I just felt like the script didn’t know how to use her character to the fullest of her ability.

The conclusion seemed abrupt and after feeling uncertainty as to where the story was headed for the majority of the movie, I found myself sitting there a bit stunned that it was over. But with that being said, if you have a chance to check it out, I would recommend doing so. The look that it provides into Xing’s life is quite disturbing, yet anyone that has faced rejection will be able to relate and will feel sympathy for this misguided boy who clearly needed a lot of help.

Hudson 'Happy' As A Single Mom