DVD Review: Amazing Journey: The Story Of The Who 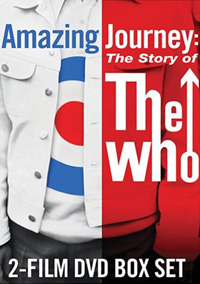 Spanning four decades, this authorized and definitive anthology of The Who relives their journey from humble beginnings to their meteoric rise to rock legend status in a 2-film DVD set. Filled with all-new interviews with band members Roger Daltrey and Pete Townshend and music icons Sting, The Edge of U2, Eddie Vedder and more, this must-have collection also features electrifying rare and unreleased concert footage in mind-blowing 5.1 surround sound. David Wild, a contributing editor of Rolling Stone, says it’s “brilliant?an exceptionally smart and intimate portrait.” For music that spoke to generations of fans, and refused to be classified, the answer is – and always will be – The Who.

Review:
One of the most influential rock bands in history, The Who, is featured in this two film pack. The Amazing Journey: The Story of the Who and The Amazing Journey: Six Quick Ones are packed with compelling new interviews with the surviving band members and those close to the band. Also you get a decent amount of unreleased concert footage which is in surround sound, so for me personally, this was a blast to watch.

This set covers it all, from the band’s beginnings in 1960 through their sky rocket to fame, and all the up’s an down’s in between. You’ll see how The Who became one of the biggest bands in the world in the strongest musical age we’ve seen.

With the holiday season around the corner, this is a perfect gift for any fan of The Who, or fan of music ingeneral. The only thing that I wished that this set provided was full concerts, but with that being said, everything else is here. In addition, you get tons of bonuses like:

– The Scrapbook: Five Additional Insider Insights into the World of The Who:

– The High Numbers at the Railway Hotel: The earliest footage of the band known to be in existence, seen in it’s entirety here for the first time.

Grade: A
Official site: http://www.thewhomovie.com/
Buy on Amazon: Amazing Journey: The Story Of The Who

Tags: Amazing Journey: The Story Of The WhoDVD ReviewMovie ReviewMovies