DVD Review: Harry Potter and the Goblet of Fire 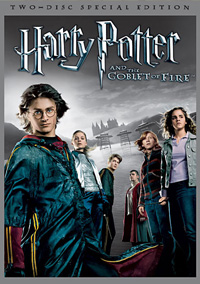 When Harry Potter’s name emerges from the Goblet of Fire, he becomes a competitor in a grueling battle for glory among three wizarding schools – the Triwizard Tournament. But since Harry never submitted his name for the Tournament, who did? Now Harry must confront a deadly dragon, fierce water demons and an enchanted maze only to find himself in the cruel grasp of He Who Must Not Be Named. In this fourth film adaptation of J.K. Rowling’s Harry Potter series, everything changes as Harry, Ron and Hermione leave childhood forever and take on challenges greater than anything they could have imagined.

Review:
Harry shows Hogwarts how it’s done once again in Harry Potter and the Goblet of Fire, the fourth installment in the wildly popular film adaptation of the Harry Potter books. This time the forum is the coveted Triwizards tournament hosted by Hogwarts in which Harry finds his name mysteriously submitted to compete against a fellow classmate and representatives from neighboring academies- and, of course, when the Goblet spits out your name, there is no backing down. On its own merits the film is thoroughly enjoyable and when compared to the first three, it seems that this last installment has a slight edge on its predecessors. It’s quite apparent in Goblet that Ron, Harry, and Hermione have aged quite a bit since the first film and the gang has begun to notice the opposite sex which surely opens up a whole new realm of possibilities. When Ron makes the dimwitted move of asking out Hermione to the winter ball only as a last resort, they’re underlying tension finally bubbles to the surface and comes to a head. Luckily not too much time is spent on adolescent angst and the gang’s awkward first steps into love and courtship and the real story remains the Triwizard tournament and the return of Lord Voldemort.

For Harry Potter veterans and those just getting their feet wet, Goblet of Fire retains the magic, excitement and youthful exuberance and is a film experience that can be enjoyed by all ages. For older viewers it is a welcomed escape to the wonder and imagination of a simpler time. With continued consistency with each film, I eagerly await the following installments of this cherished series.

Grade: A+
Official site: http://www.harrypotter.com/
Buy on Amazon: Harry Potter and the Goblet of Fire

DVD Review: Everything Is Illuminated