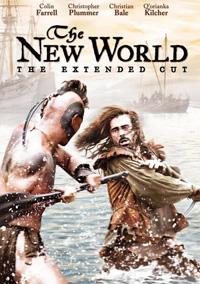 The New World is an epic adventure set amid the encounter of European and Native American cultures during the founding of the Jamestown settlement in 1607. Inspired by the legend of John Smith and Pocahontas, acclaimed filmmaker Terrence Malick transforms this classic story into a sweeping exploration of love, loss and discovery, both a celebration and an elegy of the America that was… and the America that was yet to come. Against the dramatic and historically rich backdrop of a pristine Eden inhabited by a great native civilization, Malick has set a dramatized tale of two strong-willed characters, a passionate and noble young native woman and an ambitious soldier of fortune who find themselves torn between the undeniable requirements of civic duty and the inescapable demands of the heart.

Review:
With The New world director Terrence Mallick has fashioned an indulgent masterpiece that is engrossing from start to finish. The film is virtually entirely void of any structured dialogue which leaves the viewer with an opportunity to instead feel on a sensuous, emotional level what the first travelers to the new world encountered and achieve a sense of the desperation and aprehension the natives felt when encountered by these strange visitors from a distant land. Mainstream filmgoers will surely find The New World a daunting, confusing set of imagery, however, those looking for innocence and allure are sure to be rewarded. The New World is a poetic journey that encapsulates the awe and wonder of the European conquest to the shores of North America better than any other motion picture I’ve seen. Mallick achieves this poetic wonder by abandoning traditional conversational and conventional idiomatic narration and instead uses the beautiful landscape of coastal Virginia and such classical pieces as Mozart’s 23rd Piano Concerto and Wagner’s Das Rheingold illustrate the tragic love story of Captain John Smith and Pocahontas. It seems that Mallick sacrificed nothing in his vision of The New World, save for a few scene cuts to make the film more digestible for its theatrical release. The director managed to present an epic journey without manipulation and meddling from big-budget Hollywood committees and production companies. The New World is romantic, expansive, enthralling and humbling; a film that begs to be savored, and for the viewer to abandon typical conventions and surrender to the picture to allow Mallick to weave and compose his dream-like reverie of the true nature of the discovery of the North American expanse and an allusion of the inevitable consequence found therein.