by curlie731
in Movie Reviews, Movies 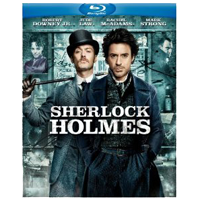 In as little as four feature films, Guy Ritchie has made a name for himself among Hollywood’s directing elite. His style is comparable to Quentin Tarantino’s, with a dose of Britain’s pop culture squeezed on top. He chose not to go to film school, because he felt that work of film school graduates is boring and unwatchable. Instead, he busted his hump in the music industry, making music promos for bands, and also some commercials. When he finally got his first movie, Lock…Stock…and Two Smoking Barrels made, he got the financial attention of Tom Cruise and Columbia Tristar, and the rest was rock n’ roll, film making history.

As a master sleuth, Sherlock Holmes has a reputation for using each and every cunning, resplendent option in his bag of tricks, to solve the most outlandish crimes. It took a bit longer than usual to bring down serial killer, and ‘black magic’ sorcerer, Lord Blackwood. After months of hard work however, Holmes and his trusty partner Dr. Watson are able to close the books on yet another successful capture. When the laws of nature subside, and Lord Blackwood returns from the grave, Holmes will have to get back in the saddle once again, and pull out all the stops, to bring the evil wizard to justice. As if the bickering between his colleague Watson and himself wasn’t overbearing enough, Holmes will have to struggle with his partner’s new fiancee, the temptress Irene Adler as they work to follow the trail of clues to get their man. Sherlock Holmes will have to rely on his deductive reasoning, his friends, and sometimes his fists, to come out on top in the end of this fiasco.

There have been many occasions where Sherlock Holmes has been down and out in his detective career, and managed to resurface in the victory lane. Hence why casting Robert Downey Jr. as the lead made perfect sense. Not only is Downey back on top, possibly at the peak of his career, after a long struggle with drugs and alcohol, he’s also got the style and charm to play the part perfectly. On the same note, what better Brit could be cast as his partner in anti-crime, than Jude Law? The two actors displayed the dead to rights, dynamic chemistry of the legendary duo perfectly. A colleague of mine mentioned that any random person could have had the job to direct this movie, but I’m awfully glad Guy Ritchie had the chance. Apparently so is Hollywood, seeing as the movie was only out two weeks, before they “green-lighted” a sequel with the director and cast returning. Ritchie’s directing style, and Downey’s playboy persona, fused by the same Hollywood camera, produced nothing but pure delight. I have a feeling if anyone else was involved in this production, it would have been below par. Thanks to the people involved, Sherlock Holmes kicked ass first, and then followed up on the clues secondly. This of course, is elementary my dear. I can’t wait to see part two in a couple of years. Iron Man 2 and The Avengers will have to keep my Downey levels in check until Sherlock returns again.