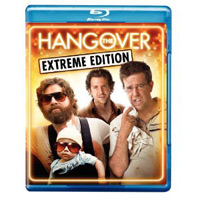 When The Hangover first came out last year, most people looked at it and assumed it was a guy movie. I did it too. However, for some reason, I still really wanted to see it. My friend and I went to see it… and laughed our asses off the entire time. Yes it’s a guy movie, but good comedy is good comedy and that knows no gender bounds.

For those of who don’t know the plot, The Hangover tells the tale of a bachelor party gone very, very wrong. After just one wild night in Vegas (a mere 2 days before the wedding) Doug (the bachelor played by Justin Bartha) is lost, his friend Stu (Ed Helms) is missing a tooth… and married, and the crew has acquired a baby. With their hotel suite completely trashed and the bathroom even inhabited by a tiger, the trio attempts to retrace their steps to find their lost friend and get him to Los Angeles in plenty of time for his wedding. And from there it just seems to get worse… and worse.

It’s a smart, raunchy, gross, hilarious film that will win you over pretty quickly. The director does a fantastic job, and the combined talents of Zach Galifianakis, Ed Helms, and Bradley Cooper makes for a consistently funny film from start to finish. A rarity in the world of comedy. While most people will sing the praises of Galifianakis in this film, I personally loved Ed Helms. And speaking of singing, he’s got some pipes on him! After hearing him sing on The Office two weeks ago, I’m thinking they’re may be some Broadway in his future if he’s interested. I definitely love his voice, and overall I find him very charming and fun to watch.

This release has a pretty awesome wedding photo album which contains 28 pages of photos from the night of the bachelor party which none of our main characters seem to be able to clearly remember. Along with the booklet, you also get picture-in-picture commentary with stars and director and a number of featurettes showing the madness of Ken Jeong, a map of destruction, the three best friends song, and more. With the holidays coming up, this is our pick for the must-have guy gift.

As long as you’re not uptight and you somewhat like comedy – you’ll love this film. It’s impossible not to.

Disclaimer: FanBolt did receive a copy of The Hangover: Extreme Edition on Blu-ray to be able to conduct this review. We’ve received no additional compensation for this review. This review is our honest opinion.