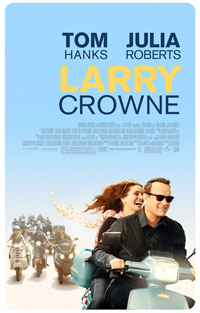 In need of a break from the summer blockbusters? Larry Crowne packs star power, humor, and a fair amount of charm… and there’s no CGI or needless big explosions for you to roll your eyes at. Larry Crowne is going to appeal more to the older crowd (After-all the film is about starting over later in life). However, anyone who has found themselves in a situation where they’ve started fresh can appreciate the humor and challenges that the script presents its characters.

Tom Hanks plays Larry Crowne, a devoted U-Mart employee who has just gotten fired. The higher-ups tell him it’s because he never went to college, and he’s gone as far as he can go in the company – despite his many years of employment. But getting axed may just be the best thing that has ever happened to Crowne. He enrolls at a community college and quickly finds himself inducted into the local scooter gang. While most everyone is half his age, they still take quickly to Crowne’s charm and help him reorganize his life.

Then there’s Mrs. Tainot (played by Julia Roberts), an unhappy teacher with a less than desirable husband (Who really is an embarrassment to all of bloggers out there). Mrs. Tainot needs a fresh start too, and Larry Crowne might just be the one to inspire it.

What’s really great about this film is that it’s hard to watch it and not smile. There’s something irresistibly charming about the innocence of Tom Hanks’ Larry Crowne and his lack of knowledge with what’s modern and hip. The supporting cast also does a great job at rounding out a feel-good summer flick. Julia Roberts is also strong as the leading lady. Her character is clearly a strong and focused individual – she’s just become bitter with her life because of the less-than-desirable (and predicable) daily routines she finds herself in. We’ve all been there, and we can all relate. Larry Crowne does a great job at bringing one of those relatable stories to the big screen. And while others may be wooed by the larger-than-life special effects of Transformers 3, I personally recommend saving a few bucks and leaving the 3D glasses be – Larry Crowne has more talent and heart, and it won’t leave you feeling like you wasted your time and money.

Grade: B+
Review By: Emma Loggins