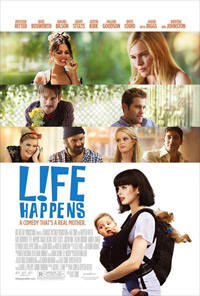 Life happens. Isn’t that the way it always is? It certainly is in this film for Kim (Krysten Ritter). Faced with the cliche dilemma of who gets the last condom for a night of action, it’s Kim’s roommate, Deena (Kate Bosworth), that lucks out. Kim does not. Fast forward a year later and meet Kim’s adorable son Max. Life hasn’t exactly turned out the way she planned. Kim’s baby daddy is a pro-surfer that thinks he knows what he wants for his life and being a dad isn’t one of them. Then there is Kim’s boss who can’t stand kids (probably because she can’t let go of being 21… even though she’s safely in her 40’s). And to top it off, Kim’s romantic life is non-existent.

When hosting a party for her boss one night, Kim meets Nicolas (Geoff Stults), and there is an instant attraction. Thinking that Nicolas isn’t a fan of kids, Kim explains that the baby in her life isn’t hers – it’s her roommate’s. Soon the time for the awkward group date arrives, and craziness ensues when Kim introduces Deena to Nicolas’ friend Henri (Justin Kirk). Though adamant about not giving into his advances, Deena slowly finds herself being worn down by their encounters. In the meantime, the truth comes out in a horribly uncomfortable sexual situation that the baby is in fact Kim’s. Nicolas does not take this well.

Life happens and Kim enters a rough spot, and while she’s down for a little while – she’s not out for the count. After some words of inspiration from her other roommate Laura (Rachel Bilson), she gets back up on her feet and refuses to give in.

If you’re a fan of Ritter’s Type A personality and on-screen perfected timing, then you’ll enjoy her role in this film. With her new series that premiered just a couple weeks ago, the masses will soon be falling for her if they haven’t already. While her role as Kim is a bit toned down in this film as compared to her role as Chloe on Don’t Trust The Bitch In Apartment 23, her same signature humor is present here is as well.

Kate Bosworth also does a fabulous job as her roommate Deena, the self-focused, I-don’t-need-a-man writer who most people would probably hate to live with. The character I really love though is Laura, who we see far too little of in the flick. Rachel Bilson’s virginal character seems clueless to the fact that she’s walking a fine line with her overly suggestive jobs. This character is where a lot of the film’s laughs originate that you don’t seem coming. Laura ends up competing to be the last virgin still a virgin on a reality series where the contestants are forced to room with attractive male models (One can’t help but think about what an amazingly entertaining but horribly bad idea a show like this would be…).

While the ending of Life Happens is somewhat predictable, it’s still an entertaining watch with a few important lessons. Don’t have unprotected sex and don’t pretend that your baby isn’t yours if, in fact, it is your baby. Important words to live by.

Grade: B
Review By: Emma