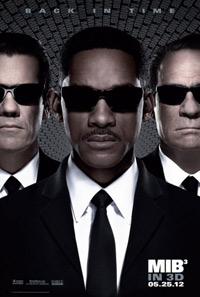 Men In Black 3 reunites us with Agent J and Agent K, a dynamic duo that we haven’t seen in the last decade. It’s no secret to moviegoers that sequels generally lack the quality of their predecessors. However, Men In Black 3 far surpasses the second installment of the franchise, and while it still posses over-the-top moments that are completely unbelievable – it still retains the charm from the original Men In Black (which first hit the big screen 15 years ago).

Will Smith (Agent J) and Tommy Lee Jones (Agent K) are joined by Josh Brolin who plays a younger version of Agent K. The casting here is incredibly remarkable. From physical appearance to mannerisms – to even his voice – Brolin makes such a convincing younger version of Jones that it’s truly creepy.

When the film opens, it’s not long until Agent K vanishes, and the responsibility for saving him lies solely in the hands of Agent J. What does he have to do? He has to travel back to 1969 to defeat the film’s villain, Boris the Animal (played by Flight of the Conchord‘s Jemaine Clement)… No big deal.

Once Agent J makes the time jump, he encounters a younger version of Agent K and has to convince him that he is indeed from the future. Together, the two have to work together to stop Boris, before the entire future changes and world is overtaken by Boris’ fellow aliens. Along the way, Agent J learns far more about his partner than he ever knew after working with him for years in the present day.

While the film is entertaining, it isn’t perfect. It takes a little while to get going in the beginning. There are even some cringe-worthy scenes early on that include a scene with Agent O (Emma Thompson) that had to have been humiliating to film. Why it wasn’t cut is beyond me. It just leaves you pessimistically thinking that you have 2 more hours to sit through. Thankfully though, it gets better and ends up being a respectable conclusion to this trilogy (if we don’t count Men In Black 2… which was anything but good… or respectable).

Indiana Jones 4 it is not, and thank God for that. When it comes to creating sequels to long ago successful movies, Hollywood could take note of a thing or two that was done right with Men In Black 3. Sure it’s a crazy movie, but isn’t that what we loved so much about the original. At the end of the day, it’s just about having some good ol’ crazy fun, and Men In Black 3 provides just that. It’s a wonderful to have such a smile on your face at the beginning of what will surely be one of Hollywood’s biggest blockbuster summers yet.

Grade: B
Review By: Emma Loggins