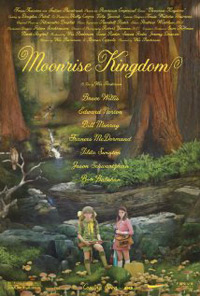 Moonrise Kingdom is the latest from director Wes Anderson and one of his best films to date. The random and stylized whimsical moments are reminiscent of his previous work, yet there is something magically different and potent about this film. The script is genuine and the nostalgic tale is engulfing. I can’t imagine too many critics can find anything to criticize here.

The film is set in the summer of 1965 on an island off the coast of New England. On this uniquely stylized island, we meet two twelve-year-olds who have fallen in love and decided to run away together. The boy, Sam (Jared Gilman), is equipment with some handy wilderness skills that he learned from the Khaki Scouts – from which he resigned in order to run away with Suzy Bishop (Kara Hayward). Suzy is a beautiful and disturbed child. Spending her days on top a lighthouse, she always has a pair of binoculars in her hands. She is constantly searching for something… Having never quite found a place where she belongs, she joins Sam without thinking twice. With her kitten, record player, and suitcase of books in tow, Suzy follows Sam across the island. The two seem to have no problem traversing the island, but do end up getting captured by a rather motivated and weaponized group of Khaki Scouts. Not being discouraged, the two escape yet again and soon find the support of the Khaki Scouts in attempts to permanently run away.

The film is decorated with talent. Bruce Willis, Edward Norton, Bill Murray, Frances McDormand, Tilda Swinton and Jason Schwartzman all do a marvelous job at rounding out the film and letting the two unknown stars shine. Kara Hayward and Jared Gilman work perfectly inside the world that Anderson has created. Their natural chemistry is unforced, and seeing the world through their eyes conveys an innocence that must be commended. Neither children were social butterflies, yet with each other they found the sense of belonging that they’ve always longed for. They’ve found their first real friend.

As children, we all dreamed about adventures with our friends without the supervision of adults to tell us what we could and couldn’t do – what was safe and what wasn’t. That’s the true beauty in Moonrise Kingdom, the viewer gets to live vicariously for a couple hours throughout the lives of Suzy and Sam. They get to remember first love and first kisses, and that sense of adventure that just took us all over whenever we were outside.

It’s been awhile since I’ve seen a film that was as touching, warm and sincere as Moonrise Kingdom. The whimsical film is undoubtedly destined to become a classic staple of Anderson’s work. I personally enjoyed the film more than two of my favorite films from Anderson’s resume, The Royal Tenenbaums and Rushmore, so it’s safe to say if you’re a fan of those films – you’ll love the innocence and charm of Moonrise Kingdom.


Grade: A+
Review By: Emma Loggins

The Brown Brothers Do Sin City On 'Sister Wives'