Deadpool ranks highly as one of the wittiest (and most R-rated) superheroes on the big screen. There are plenty of amazing Deadpool quotes to choose from, not just from Ryan Reynolds’s masked vigilante but from the rest of the colorful cast as well. The writers give the actors some incredible material to work with. It makes the films hilariously unforgettable.

Here are some of the best Deadpool quotes from Deadpool 1 and 2.

Deadpool swears like a sailor and uses his colorful language to paint rather stunning pictures. Some of his lines could almost be considered poetry if they weren’t so crude.

Here are some of the best Deadpool quotes from both the protagonist himself and the other characters as well.

“If I ever decide to become a crime-fighting shit swizzler, who rooms with a bunch of other little whiners at Neverland Mansion with some creepy, old, bald, Heaven’s Gate-looking motherfucker… on that day, I’ll send your shiny, happy ass a friend request.” ― Deadpool

“You’re about to be killed by a Zamboni.” ― Deadpool

“Life is an endless series of trainwrecks with only brief commercial-like breaks of happiness.” ― Deadpool

“Listen Al, if I never see you again, I want you to know that I love you very much. I also buried 1,600 kilos of cocaine somewhere in the apartment — right next to the cure for blindness. Good luck.” ― Deadpool

“She’s like Robin to my Batman, except she’s old, and black, and blind. And I think she’s in love with me. Wait, pretty sure Robin loves Batman, too.” ― Deadpool

“You might be wondering why the red suit. Well, that’s so bad guys don’t see me bleed.” ― Deadpool 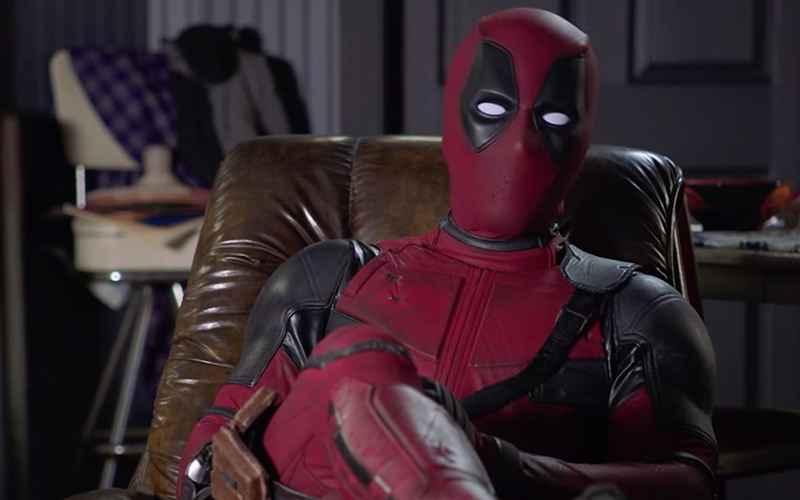 Weasel: “And killing them, I know, I saw your Instagram.”

“Well, I want to remember us. I swear to God, I will find you in the next life and I’m going to boom-box Careless Whisper outside your window.” ― Vanessa Carlysle

“You don’t need to be a superhero to get the girl. The right girl will bring out the hero in you.” ― Deadpool

“Listen, we both know that cancer is a shitshow. Like, a Yakov-Smirnoff-opening-for-the- Spin-Doctors-at-the-Iowa-State-Fair shitshow. And under no circumstances will I take you to that show. I want you to remember me, not the ghost of Christmas me.” ― Deadpool

“After a brief adjustment period, and a bunch of alcohol, it’s a face… I’d be happy to sit on.” ― Vanessa Carlysle

“I didn’t ask to be super, and I’m no hero. But when you find out your worst enemy is after your best girl, the time has come to be a fucking superhero.”― Deadpool

“Here’s what I’m actually gonna do? I’m gonna work through his crew until somebody gives up Francis, force him to fix this, and then put a bullet in his skull and fuck the brain hole.” ― Deadpool

One of the greatest parts of Deadpool movies is his constant fourth-wall-breaking. None of the movies take themselves too seriously, and the writers constantly let the characters poke fun at well-worn superhero tropes.

Here are some of the best quotes from Deadpool that involve fourth-wall breaks.

“Guy came in here looking for you. Real Grim Reaper-type. I don’t know. Might further the plot.” – Weasel

“It’s a big house. It’s weird I only ever see two of you. Almost like the studio couldn’t afford another X-Man.” ― Deadpool

“You’re still here? It’s over. Go home! Oh, you’re expecting a teaser for Deadpool 2. Well, we don’t have that kind of money. What are you expecting? Sam Jackson showing up in an eyepatch and a saucy little leather number? Go!” ― Deadpool

“You’re probably thinking, ‘My boyfriend said this was a superhero movie, but that guy in the red suit just turned that other guy into a fucking kebab!’ Well, I may be super, but I’m no hero.” ― Deadpool

“Looks are everything! Ever heard David Beckham speak? It’s like he mouth-sexed a can of helium. You think Ryan Reynolds got this far on a superior acting method?” ― Deadpool

“Yeah, technically, this is a murder. But some of the best love stories start with a murder. And that’s exactly what this is. A love story. And to tell it right, I got to take you back too long before I squeezed this ass into red spandex.” – Deadpool

”You are so dark. Are you sure you are not from the DC universe?” ― Deadpool

“Oh, oh, so they’re letting Robin Hood in, but somehow the Avengers keep losing my phone number. What’s up with that?” ― Deadpool

“I’d sing some Black Sabbath right now, but the bean counter says we spent all our money on writers. What a waste.” ― Deadpool

“I know, right? You’re probably thinking, ‘Whose b***s did I have to fondle to get my very own movie?’ I can’t tell you his name, but it rhymes with ‘Polverine.’ And let me tell you, he’s got a nice pair of smooth criminals down under.” ― Deadpool

“F**k Wolverine. First, he rides my coattails with the R rating. Then the hairy motherf****r ups the ante by dying. What a d**k. Well, guess what, Wolvie? I’m dying in this one, too!” ― Deadpool

“You know what we need to do? We need to build a f**king team. We need them tough, morally flexible, and young enough so they can carry this franchise ten to twelve years.” ― Deadpool

While undeniably crude, you have to admit that Deadpool comes out with some hilarious quips. Wade Wilson uses humor to deflect his trauma, and that gives the audience some great lines to enjoy.

Here are some of the funniest Deadpool quotes from movies 1 and 2.

“Whose kitty litter did I just shit in?” ― Deadpool

Weasel: “That’s the shit emoji. You know the turd with the smiling face and the eyes? I thought it was chocolate yogurt for so long.”

Deadpool: “And you are?”

Deadpool: “Negasonic Teenage… what the shit? That’s the coolest name ever!”

“I had another Liam Neeson nightmare. I kidnapped his daughter, and he just wasn’t having it. They made three of those movies, at some point you have to wonder if he’s just a bad parent.” – Deadpool

“Star in your own horror films. Because you look like Freddy Krueger face-fucked a topographical map of Utah.” ― Weasel

“If your left leg is Thanksgiving and your right leg is Christmas, can I visit you between the holidays?” ― Deadpool

“Okay guys, I only have twelve bullets, so you’re all going to have to share!” ― Deadpool

Tell us in the comments!