The newest Marvel film is finally here! And what makes that even better is that it’s directed by one of my favorite directors, Taika Waititi. So naturally, I went into Thor: Love and Thunder expecting pure magic – much like what Waititi delivered with his last Thor film, 2017’s Thor: Ragnarok. So, did he deliver? Eh….

Thor: Love and Thunder finds the God of Thunder (Chris Hemsworth) on a journey, unlike anything he’s ever faced before. He’s on a journey of self-discovery. However, Thor’s retirement is interrupted by a galactic killer known as Gorr the God Butcher (Christian Bale), who seeks the extinction of the gods.

To combat the threat, Thor enlists the help of King Valkyrie (Tessa Thompson), Korg (Taika Waititi), and ex-girlfriend Jane Foster (Natalie Portman), who – to Thor’s surprise – inexplicably wields his magical hammer, Mjolnir, as the Mighty Thor. Together, they embark upon a harrowing cosmic adventure to uncover the mystery of the God Butcher’s vengeance and stop him before it’s too late.

Thor: Love and Thunder Movie Review: What I Did and Didn’t Like

Let me start off by saying Thor: Love and Thunder isn’t a bad film. It’s a fun Marvel movie with moments of perfectly-timed humor, impressive action sequences, and a fun story. But even with all the ingredients, something was off that I had trouble putting my finger on. Like when you make what should be a tasty meal, and you take a bit, then realize it needs something else to make it the meal you intended.

Granted, fans will flock to the theaters to see this one regardless of what critics say. It’s still a fun film with stunning visuals. But exactly what was that the movie was missing that could have made all the difference?

I don’t have any major complaints about performances here. Chris Hemsworth does a great job as Thor as he always does. Christian Bale, who is almost unrecognizable as Gorr, also delivers a creepy good performance. The character (and Bale’s take on it) actually reminded me a lot of Ralph Fiennes’s work as Lord Voldemort from the Harry Potter franchise.

My only criticism was of Natalie Portman’s Jane Foster. There were multiple scenes that felt over-acted. Portman’s reactions and expressions were being amplified in a way that wasn’t consistent with other performances I’ve seen from Portman. So it stuck out to me here. Portman is a fantastic actress, so I’m not sure if the issues in this film were due to the direction she was given or just her own take on the character.

The plot overall feels thin, especially when dealing with some larger topics such as sickness and mortality. There’s a lot going on in almost every scene and all the special effects really amplify that. It’s a feeling of style over substance, or at least it was for me.

There are wonderfully funny moments, especially with Mjolnir (who in my opinion is the real star of this film). But overall the comedic moments feel different here, forced almost, in comparison to Thor: Ragnarok where they felt fluid and natural.

One thing I absolutely loved about this film was the visuals. Waititi definitely made some strong stylistic choices in comparison to what Marvel fans are used to, and when paired with the film’s soundtrack – it just works.

And it works especially well on the big screen. The intensely bright colors feel fun, light, and energetic. The issue, as I mentioned further up, is that the rest of the script adds weight and almost a sense of fatigue to the film. So despite cool visuals, well-executed special effects, and a color palette that is an 80s  playground, these elements alone can’t right the ship. 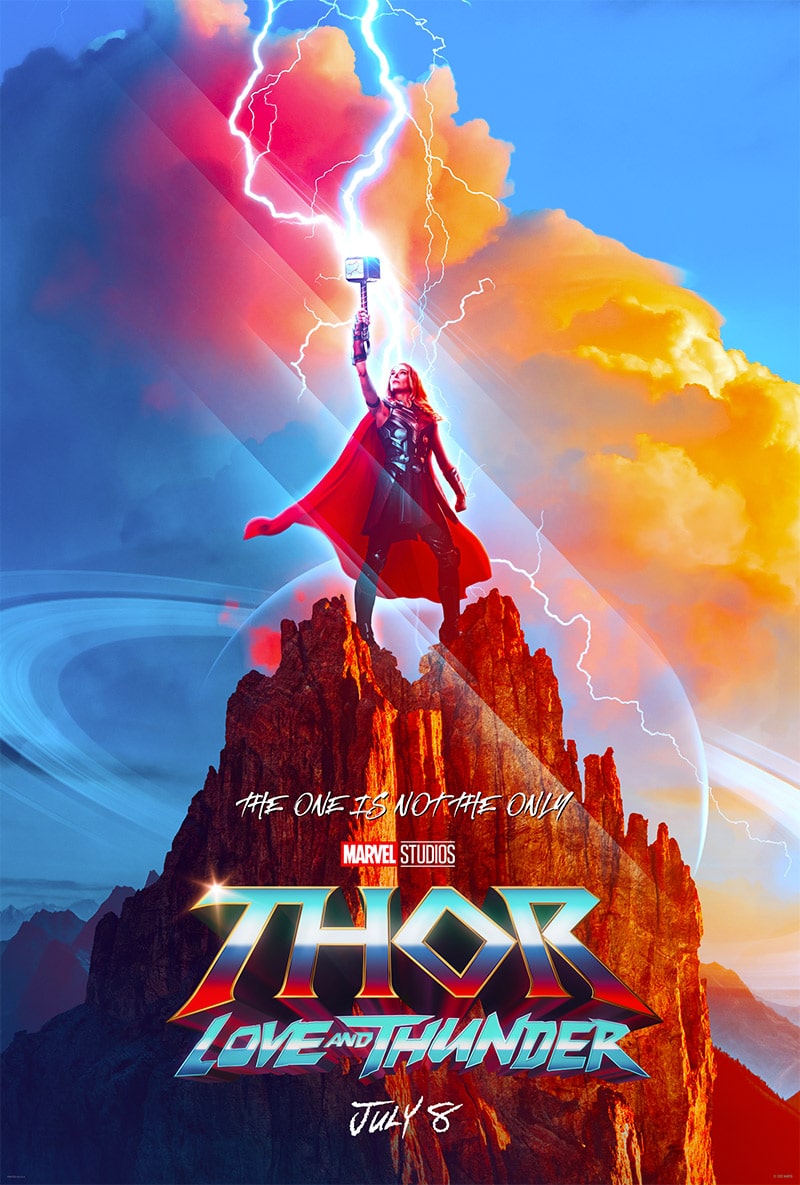 I think the biggest issue I had with the film is that I went in expecting something on the same level of awesomeness as Thor: Ragnarok. And while Thor: Love and Thunder is enjoyable, it’s inferior to Ragnarok in a few areas, the main one being humor. The comedic moments don’t flow with as much ease as they did in the 2017 film. Moments seemed forced. And the overall magical Marvel mix of humor, adventure, and sensibility is off.

There is still loads for fans to love here. But ultimately, I would have loved to have seen something that felt new and exciting.