When I first saw the trailer for Bullet Train, my initial reaction was, “I’m good. I’m going to pass.” It didn’t look like the type of film I would typically enjoy. However, I got talked into giving this one a chance. And I’m unbelievably glad I did. I went in with low expectations, and I ended up having an absolute blast.

So what’s the plot? In Bullet Train, Brad Pitt stars as Ladybug, an unlucky assassin determined to do his job peacefully after one too many gigs gone off the rails.

Fate, however, may have other plans, as Ladybug’s latest mission puts him on a collision course with lethal adversaries from around the globe—all with connected, yet conflicting, objectives—on the world’s fastest train. The end of the line is just the beginning in this non-stop thrill-ride through modern-day Japan from David Leitch, the director of Deadpool 2.

Bullet Train Movie: What I Did and Didn’t Like

There’s not much that I didn’t like about this film, unlike a lot of my fellow critics who clearly did not enjoy it. While Bullet Train won’t be winning any Oscars, that’s okay. A movie can still be wildly entertaining without needing to stoke the interest of the Academy. And I can honestly say I haven’t had this much fun in a theater – possibly ever. (At least not that I can remember).

Every single actor shines as comedic gold in this film. But there are a few actors that truly stand out, and the first one is Brad Pitt. I really love the characters Pitt has been choosing to play the last few years. And his performance here is no exception. He brings the perfect mix of charm, action, comedy, and charisma to the role of Ladybug.

Pitt’s chemistry with his cast mates is also something that needs to be mentioned. Specifically with Aaron Taylor-Johnson (Tangerine) and Brian Tyree Henry(Lemon), who play key roles in this film’s comedic moments. The dynamic they have with Pitt makes it easy for the audience to get lost in these characters, regardless of how over-the-top every other scene may be.

There are also a number of surprise guest appearances as well that are perfect additions to the film’s insanity. But we’re spoiler-free. So I’m not even giving you a hint here. Feel free to discuss spoilers in the comment section below though! 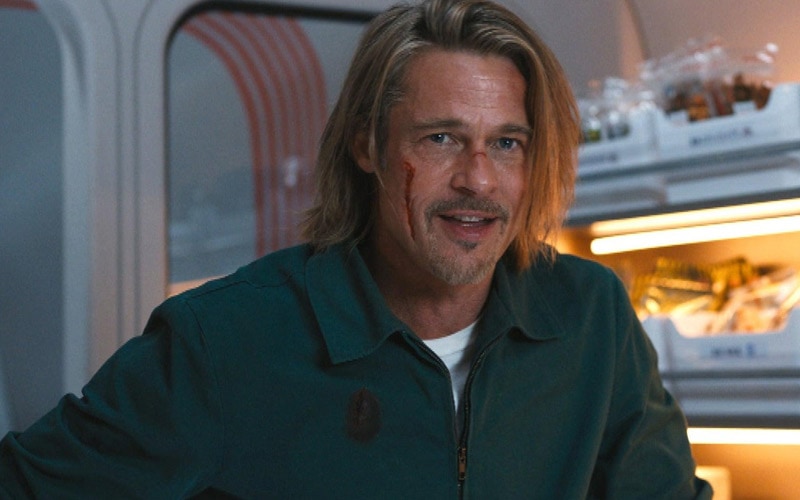 The script is pretty excessive with action. But it’s supposed to be. And that’s what makes it so much fun. It’s a non-stop thrill ride from beginning to end, with plenty of twists and turns to keep you guessing. And it’s been a minute since I saw a film that wasn’t predictable. I didn’t see the ending coming with this one, and that was breath of fresh air.

The dialogue is sharp and witty, and the characters are all well-crafted. I didn’t feel there was a single wasted scene or line of conversation in the entire film. Everything moves the story forward, and keeps the momentum going. And the laughs, well, they don’t stop.

The cinematography feels exaggerated, but not in a way that is annoying. The action scenes are shot in a way that’s both stylish and kinetic. And the use of color is simply beautiful, with a lot of attention paid to framing and composition.

The fight sequences are stylishly brutal and choreographed with a flow that feels almost like a dance. There’s a certain flair and elegance to the violence, which sounds weird to say, but it creates an overall aesthetic that works well with the film’s style and the characters’ dialogue. Everything just comes together with ease and is a joy to watch on the big screen.

Bullet Train is a fast-paced, stylish, and extremely entertaining action comedy. It’s not going to win any awards, but it doesn’t need to. This film is pure fun from beginning to end. It’s a wild, insane, immensely funny thrill ride, and I can’t wait to see it again when it hits streaming later this year.

If you’re looking for a fun action movie with no shortage of laughs, I can’t recommend this one enough. It’s truly the most I’ve laughed at a film in at least the last decade, if not longer.