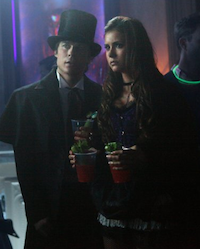 Halloween may have passed, but there’s still time to celebrate! Blood, stakes, and attractive men are a few things to describe last night’s epic episode of The Vampire Diaries! While Elena (Nina Dobrev) tries to learn how to control her bloodlust, my favorite duo decide to do a little digging on the origins of the new hunter! I can still hear the Klefan and Delena shipper’s screams of joy!

Where shall I start? Well, Elena, Damon (Ian Somerhalder), and Bonnie (Kat Graham) decide to take a trip to a university… Which is apparently the perfect place to talk about witchcraft and learn how to feed properly. Who knew! Bonnie pretty much disappears with the very attractive (and secretive) Professor Shane (David Alpay) to talk about her grandmother and witches. Was it just me, or did anyone get that creepy student-professor love type feel? I thought they were going to make out at any moment! Besides the point, with Bonnie off with the Professor, we’re left with Damon and Elena on the prowl for fresh blood. What better place to find it than a frat party! Okay, the fact that the Professor was at the party was creepy. Just because he looks young and hot, does not mean that it’s okay for him to go to college parties… Loopholes, I guess? Regardless, Elena goes off the rails, and although she doesn’t kill anyone, she gets a little crazy… And flirty, with Damon! Sadly for all the Delena shippers, the moment was short lived! It inevitably ended with Elena judging Damon, an intimate scene, that was destined to be interrupted. Better luck next time DEers!

Klefan time! As always, Klaus (Joseph Morgan) is out using people to get what he wants. In this case, Stefan, Rebekah (Claire Holt), and Jeremy (Steven McQueen) are his unlucky victims. Stefan was curious to know about “The Five,” so he took it upon himself to ask Klaus. This prompted Klaus to make a deal with Stefan. Get Rebekah over to his place for a few answers… Seems fair enough, until he has to sit through the most awkward dinner in history. Lucky for him, it was worth it! We come to find out that “The Five” are a group of brother’s who were Grade-A hunters back in the 1200s! Well, Rebekah fell for one, and it ended in a complete disaster. But, it is later revealed that the ‘tattoos’ were really a discrete map leading to a cure to… Being a vampire! This automatically sparks an interest in Stefan, seeing as he not only wants humanity for himself, but also Elena. The mission for this season has finally been revealed!

Now, I know a lot of Delena fans were upset with this episode. Damon and Elena had a fight, AND their usually epic porch scene was cut short by Stefan… Regardless, I actually enjoyed this episode! I thought it was interesting, and I love flashback episodes. Plus, the new addition of Professor Shane was… Thrilling? Especially because of that plot-twist ending! As always, TVD leaves us on our toes, and finally provided a few answers! Can it be next Thursday already?

Merlin Review And Recap: The Disir

'The Walking Dead': Robert Kirkman And David Morrissey Talk Season 3 And The Role Of The Governor