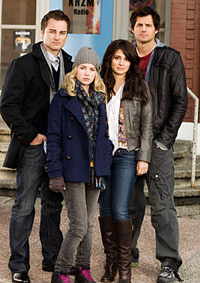 Grammy Award-winner Sarah McLachlan performs her new single “Forgiveness” in the “Life Unexpected” crossover episode with “One Tree Hill,” which is currently filming in Vancouver. The episode will air Tuesday, October 12 (9:00-10:00 p.m. ET) on The CW. Also singing in the episode will be “One Tree Hill” series star Bethany Joy Galeotti (Haley) and recurring guest star Kate Voegele (Mia), along with Ben Lee and Rain Perry (singer/songwriter of the “Life Unexpected” theme song).

The crossover episode of “Life Unexpected” brings “One Tree Hill” characters Haley and Mia to a music festival, sponsored by a Portland radio station and hosted by Ryan (Kerr Smith). At the concert, Haley and Cate (Shiri Appleby) meet and discover that they have incredibly similar pasts. It turns out that both women were somewhat nerdy, overachieving teenagers who got pregnant in high school by athletes named Nate (or Nathan). And when a secret of Cate’s gets outed, Cate turns to Haley for advice.

“One Tree Hill” was created by Mark Schwahn and is executive produced by Schwahn, Joe Davola, Greg Prange, Mike Tollin and Brian Robbins. “One Tree Hill” is produced by Mastermind Laboratories and Tollin/Robbins Production in association with Warner Bros. Television.

“Life Unexpected” is produced by CBS Television Studios and Warner Bros. Television in association with Mojo Films with executive producers Liz Tigelaar (“Brothers and Sisters,” “What About Brian”) and Gary Fleder (“October Road”).

'Kick-Ass' Sequel In The Works