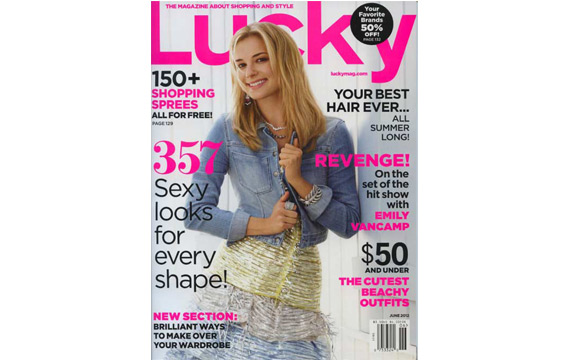 Revenge star Emily VanCamp graces the cover of the new issue of Lucky Magazine. She opens up about the series, fashion, and what she’s looking for in a guy!

VanCamp has been rumored to be dating Revenge co-star Joshua Bowman. Rumors that started when the two were spotted kissing off camera. So is she or isn’t she? Mums the word! She’s not confirming anything.

“I’ll tell you one thing I don’t want,” VanCamp says. “A guy who sits around and plays video games and smokes pot.” She shakes her head. “Though I think every young woman needs to have one boyfriend who really disappoints her, who really breaks her heart.”

What about fashion? How does she look so amazing all the time? She has retained the services of Petra Falnnery, an A-list stylist that has worked with actresses such as Emma Stone and Mila Kunis.

“Petra is so chill and open to anything,” VanCamp says. “And there’s no ego involved with her. She’s totally fine if I don’t like something.”

With the season finale just around the corner, what we all really want to know is what can we expect with the rest of the season. While we know ABC has Emily on tight lockdown about what she can and can’t say to tease fans, she did tell Lucky that things are going to get even darker.

“We’re going to go into the past and see all the crazy stuff that happened in Emily’s life that brought her to the point where she feels these people deserve to be punished.” VanCamp explains.

Want more details? Check out more from Emily and Revenge in the new issue of Lucky Magazine!

Fable Heroes Review: Even The Credits Are A Blast!