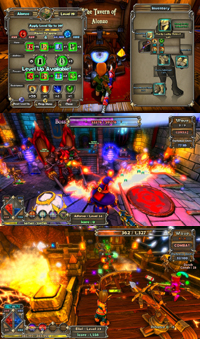 Dungeon Defenders feels like a dungeon crawler, but is a defense strategy game at its core. So, in this case you are not exploring the dungeon as you will instead be defending it.

Starting out you will be choosing your character from 4 different character types. I am a complete hack and slash guy, so I went straight for the warrior type character. You can customize the colors for your character so that you have your own look. You will then be placed in the tavern where you can choose what it is you would like to do next. Your options are: Choosing your campaign and challenge missions, in addition to selecting your choice of game types, such as pure strategy or survival mode. Also, you will find a shop there for you to do all of your business, such as buying and selling items or buying pets.

Each level places you into a dungeon with a crystal in which you must protect the crystal from being destroyed. Each dungeon has its own unique setup and you will have to strategize on how you will want to defend it. Each level has a specific amount of waves of enemies that you will have to fight off. Starting off you will have a build phase in which you will use your mana to build defenses, such as blockades and turrets. You will only have a certain amount of mana to start with per what you find in the treasures chests in each dungeon. As you destroy enemies more mana will present itself. After you are all set, or as set as you can be in the building phase, you can activate the combat phase. Also, displayed for you is the amount of enemies that each combat phase will have, so you can also prepare for what is coming. The first few waves are obviously the easiest, so that you don’t have to worry about each side being completely secure with blockades as you can just go hack down the enemy. But, the last few waves will give you a great challenge, in which you will have needed to set up blockades in key spots to help you in your defenses of the crystal.

You character won’t be the fastest at first either. In fact, you are pretty slow to the point where I was annoyed with how slow I was. Thankfully, as you level up you will be able to level up your speed. But once again, don’t think you can do it all on your own in this game. This again is a defense strategy title where your defenses that you build are essential to your success. You can also upgrade your defenses, which also costs a certain amount of mana. The higher you level up your character the more mana you can hold at once. But, it’s not easy to just simply build and upgrade your defenses where you want them, as once again you will only have a certain amount of mana each round to set up your defenses. So once again, strategy is a key in your success. You will have a number of things to upgrade your character in. However, it’s not only about speed though, as I am sure a lot of you will be like I was and wanting to upgrade that first. But, like any dungeon crawler you have a wide selection of things to upgrade including skills and abilities. As you play each level you will also run into a good selection of loot as well for you to collect and sell off unless it’s worthy of equipping your character with.

The gameplay in my opinion is absolutely fantastic and so much fun to play. It really is a perfect mix of dungeon crawler and hack and slash combat mixed in with a fun defense strategy game. The fighting feels really good and is a ton of fun to do. The setting up of your defenses is easy and fun also. When the action ensues you can pretty much get right up on where the enemies come out from and attack away, then make your way over to the other areas. There are many areas in which enemies come from and like I said you don’t have the speediest character ever, so you will have to rely on your defenses until you can get over there to help clear them out. Once again, this game really is the perfect mix and has wonderful gameplay to it. After each level it gives you a nice overview with a load of stats to view. It displays your time, kills, mana collected, damage taken, deaths and more. It is ok to die in this game as it is only game over when your crystal is destroyed.

The AI in the game is pretty good as well, and the enemies are fun to hack and slash away at. They range very well in difficulty as well, especially when you come up against the big ogres because they will take you a good long while to take down. Make sure they don’t get anywhere close to your crystal though, or it will be game over pretty quickly. Another nice thing about the game is that it’s not just when in the midst of enemies that you will have to worry, but there are also birds that you will have to watch out for as well since can fly right over your blockades. However, there are ways of dealing with them as well.

Dungeon Defenders also features good visuals and elaborate dungeons for you to do your defending in. It also features a wonderful soundtrack that is great to listen to. This game is just that good in so many ways!

Dungeon Defenders is a must own title for almost anyone and especially those who are a fan of dungeon crawlers or defense strategy titles. This will be a wonderful addition to your list of arcade titles to own. With a lot of depth and different modes to play in, there is a ton to keep you busy for a long while; therefore, making it well worth your gaming time. Plus, being able to play online with friends in many different modes just makes it that much better. Definitely get your hands on this game, as you will not be disappointed with this pure fun and fantastic title!

Sean Penn To Direct 'The Comedian'