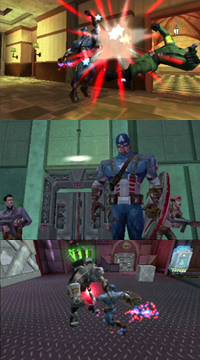 My latest review is for Captain America: Super Soldier which is an action adventure title that I played on the Nintendo 3DS system.

Captain America: Super Soldier is a pretty simplistic action title. It walks you through the motions as you start off and makes sure that you understand your surroundings. It almost seems too simple at times right from the beginning. It will tell you where you need to go unless you decide to turn that option off in the options menu. As the action ensues during fights it also lets you know when you need to counter attack an enemy as the enemies are getting ready to attack you. So, instead of having to look for it and be aware, all you need to do is look for the X button to show up above their head and push it when it does. It’s not always that easy however, but it does help ease the gameplay. Also, as you move throughout the levels, when you need to jump from location to location it puts an arrow on the location where you can jump, so that you know to jump there instead of taking a blinding leap of faith. Again, these are not big issues as they are just baby steps.

The gameplay is actually pretty enjoyable. You have your attack option, counter attack and shield throwing option for all of your attack moves. You also have your block button that does come in handy when dealing with certain enemies. It’s pretty much a beat-em up style game though it does provide you with different looks and special power moves that you can perform on enemies. There are a decent amount of moves, so that when you do perform one it doesn’t get too old. Also, the touch screen feature is of good use here as well. You can use the touch screen to aim where you would like to throw your shield. Also, when the enemies are firing their guns at you and you pull out your shield to block. One of the options is that you can aim where you would like to redirect those bullets to, by using the touch screen to direct them off of your shield and to a target. However, one of my complaints is that the throw shield button is used by the left bumper and the block button is the right bumper. Both control set ups do not allow you to switch that. The reason that is an issue for me is because I hold my stylus with my right hand, and I can’t hold both the right bumper button and stylus to redirect at the same time. Although, I could use my thumb on my left hand to touch the touch screen and redirect the bullets that way, but it’s not as effective as a stylus would be.

The game starts out rather easy as you fight your way through the first couple of levels in which there are 9 total levels for you to play in. By the third level is when the difficulty seemed to pick up more and give me a much better challenge when dealing with enemies. Plus, the type of enemies increased in difficulty as well and made them more difficult to defeat. The AI comes off as rather good by that point and gives you a nice challenge while you are fighting your way through each level. The level design is fairly average looking, although the game does look pretty good while playing in 3D. There are plenty of secret areas to find as well and other material to keep a look out for that goes along with the games unlockable content. Another thing about each level is that you will be spending a decent amount of time within each level. You can end up spending well over a half an hour in one single level. Actually, it doesn’t come off feeling as if it goes on and on with no end. It plays out pretty well as it also depends on how your play style will be. For me I was making sure to find all the special items and made sure to destroy a good amount of boxes and so on.

Throughout the game you will also run across special challenges for you to compete in and by which you will earn tokens and unlock concept art. The challenges can be rather fun as well ranging from hitting a certain amount of targets with your shield before time runs out, to using stealth and sneaking up on bad guys without them knowing and knocking them out.

I must also say the boss fights are a lot of fun too and can be quite challenging. I was disappointed though in one of them due to me trying to finish the guy off so I am constantly tapping the attack button and I ended up defeating him. But, the issue was that it quickly went to the cutscene when I was still pushing A to attack and I ended up skipping it. I hate it when that happens! They are very good battles though and a good challenge.

I must say that I found myself enjoying Captain America: Super Soldier quite a bit. It was a lot of fun and I like all the fighting and the enemies I faced. The bosses are a good challenge as well and there is a lot to do during each mission and items to be on the lookout for. Captain America fans or any fan of action beat-em up titles, I expect you all would enjoy this title as it is a lot of fun to play on the 3DS. It has enough going on within the game and good action sequences. There doesn’t seem to be anything too over the top, but it does play out pretty well. I will say that I did find one glitch though in level 3 that got me stuck in a building I wasn’t suppose to be in yet, and so I had to start the entire mission over again. If you accidentally step on a block that doesn’t look right, just know you probably shouldn’t go that way yet. Good action, decent gameplay and nice music equals a pretty decent title.

The Rum Diary Review: Too Much Rum?