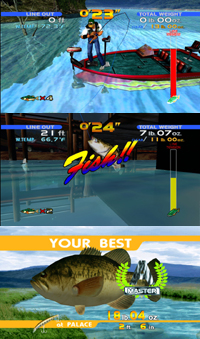 SEGA Bass Fishing is a great way to fish when you are not actually fishing. In fact, attempting to catch a 20 pounder has never been so fun! You will start out choosing to play either arcade or original. Arcade is a good quick way to fish, but the original mode is the most in depth way to go about things. Original mode features tournaments for you to participate in which each tournament has multiple stages. During each stage you must accumulate the most weight worth of fish. So, the bigger the fish you catch the better you will be in the rankings. You’ll have to qualify for the next tournament as well so if you do bad in the tournament before you won’t be able to play the next tournament until you rank better.

You can pretty much look at original mode as a career mode. So, while you participate in the tournaments and attempt to rank in at the top of the leaderboards, the game will also keep track of all of your stats. How many fish you caught, the pound range of the fish where in? and how many times you played and finished in first. There is also a diary that keeps track of every single fish you have caught. It records the date, size of the fish, what lure you were using and location of the catch. Speaking of locations, in arcade mode you have 3 areas to fish in with a hidden bonus area. While playing original mode, you will fish in the same areas, but in different times of the day as well. The locations are nothing to exciting, but they work well. However, there is one location I can’t stand as it just comes off as rather boring and annoying. I swear it has nothing to do with me not being able to catch fish there either.

Going into the gameplay, it is rather simple to play and understand. You will still use some strategy as it’s not just about getting a fish to bite, but the location of when you get the fish to bite seems to be key also. You don’t want to catch a big one too far out from your boat or you will have a heck of a time trying to reel him in without snapping the line and having him get away. You also have multiple lures to select from and each one with it’s own unique traits to help you in different spots. Some will be good for staying on top while others are better for going into deeper waters. As you play the game you will unlock the hidden lures. The gameplay is certainly a lot of fun though and attempting to catch the big ones makes it ever better. You’ll be reeling them in while moving the control stick left and right to help bring in each fish without putting to much pressure on the line.

SEGA Bass Fishing is a surprising addiction for me now. I had a slow start with the game, but as I kept playing I really ended up getting into it and having a lot of fun with it. It’s a good challenge and those tournaments that you will participate in are not the easiest at times. You will have moments where you can’t catch a thing. So the replayability factor in this game is a good one for sure. I will also say that it’s a great deal of fun when you know you are reeling in a big one. Plus, one of the achievements is to catch a 20+ pound fish, and I had a ton of fun trying for that achievement and was excited when I did catch a 20 pounder. There is another achievement for catching a total of 500 fish which that will take some time, but I will be tempted to do just that. One of the things I don’t like is the time expiration while reeling in your catch. If you catch a fish and you are in the process of reeling it in, but the time expires during that process you won’t be able to finish the catch and add that fish to your total. So frustrating! I had a few times where that had happened to me and it would of made all the difference in my overall score. I found it to be too funny that I was yelling at the TV over a fishing game! I have to say though that this is a fun and addicting title that should be looked into.

The Rum Diary Review: Too Much Rum?