by Maxwell Morrison
in Entertainment, Gaming 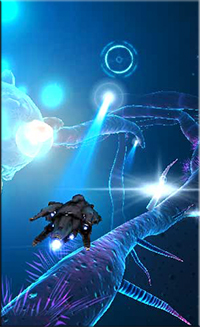 Nano Assault EX was announced earlier this morning via Shin’en Multimedia’s Twitter account. Nano Assault was originally released on the Nintendo 3DS as a retail title last December, and is now being re-released in digital form on the Nintendo eShop in Europe and North America. The initial release, a spinoff of their acclaimed Nanostray franchise, was met with favorable critical reviews. The new version is “based on the original release but with new game modes & options”.

Fans will remember that the original game released just before the Circle Pad Pro, and did not feature support for the device. We reached out to Shin’en to find out more details on the new modes and the potential for Circle Pad Pro functionality. They’re being tight-lipped about most of the details, but have confirmed that the new version of the game will support the device.

“We will have a bigger announcement in September where we will detail all the new stuff,” says Manfred Linzner, co-founder of Shin’en Multimedia.

Shin’en also has several other titles in the works, including Jett Rocket: Super Surf for the eShop and a “futuristic action title” for WiiU. Stay tuned for more news on all of these upcoming titles from Shin’en Multimedia!

Aisha Tyler Talks About Why She Loves 'Archer'

BioWare Announces Free To Play Options For The Old Republic