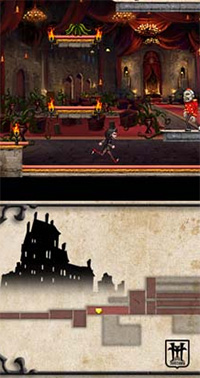 Hotel Transylvania revolves around the character of Mavis as she is turning 118 years old. Therefore, it’s time to celebrate! Dracula has invited many guests to the hotel in order to help celebrate her birthday and wants to make sure that his guests are well taken care of. Therefor it falls upon you to perform many tedious tasks as you begin your adventure, by greeting the guests and helping them with their needs. There are tasks such as restoring power in select locations or fetching lost items. However, even though it’s not interesting, it still has decent gameplay to enjoy. This game is certainly catering to a younger audience, but for those who are a fan of the movie and even fans of platformer games, it still offers up some decent gameplay that can be enjoyed.

As you start Hotel Transylvania, you won’t have any special abilities to begin with, but you will soon unlock new abilities as you accomplish tasks. The gameplay is very simple to control and it all takes place throughout the many rooms of the hotel. It may not look like a big hotel on the map, but it certainly can seem big and is full of many secret areas. Once you get into the game, it becomes more interesting as you stumble across those secret areas. You’ll come across many that you won’t be able to access yet since you haven’t unlocked your abilities. As you progress and unlock abilities, you will be allowed to progress into those areas. One example is the shock ability, which you can use to power a generator and have it open a door. Or once you become a bat, you will be able to fly up into secret areas that you would be unable to reach by any other means. It makes the game and its surroundings more interesting as you get further along. However, once you unlock the bat ability you’ll be towards the end of the game, and once you beat it you’ll start wishing there was more than just the 10 bonus levels.

As you make your way through the hotel, there are many monsters that will get in your way. Nothing you deal with is overly difficult, but you’ll still have to use smart timing in areas and on those monsters. There is one ability that allows you to freeze an enemy and you will need to do that specifically in certain areas of the game so that you can jump on top of them to then be able to reach a higher spot in that room. So, even though the game is relatively simplistic, it still makes the platforming fun and an enjoyable experience. Some enemies can’t be killed, but you can knock them down for a short time by jumping on them or zapping them with your shock. The others you will simply jump on to get rid of them. The boss battles aren’t that exciting, and the first few are very lackluster. Though I must say, even though they aren’t great, there were a few I enjoyed and I even had a slightly difficult time with one of them – it was a timing issue. So even though the game feels simple, and is indeed an easy game, it will still remind you at certain points and even force you to be at your best in one or two areas.

Hotel Transylvania isn’t the most exciting game out there and is very short, but there are some extras including 10 bonus levels that you can unlock and run through pretty quickly. It does have enough to be enjoyed by a younger audience and those who are fans of platformers and the movie as well. It’s incredibly easy and can be very tedious at times, especially with all the back and forth you will be doing towards the end of the game. Still, it’s not horrible, but I would have preferred a lot more out of it.