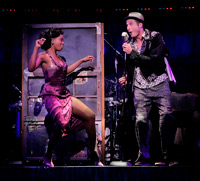 Looking for some fantastic music and top-notch dancing? Memphis, which just rolled into Atlanta, delivers! The 2010 Tony Award Winner for Best Musical tells the story of the underground clubs of the 1950s in Memphis, Tennessee.

When a white, wanna-be radio DJ Huey Calhoun catches a break, he starts introducing the people of Memphis to some new tunes. This doesn’t exactly sit well with everyone, but it doesn’t slow him down. While falling for a talented African-American singer named Felicia, Huey finds himself thrust into the spotlight as his radio show becomes the #1 show in Memphis! But everything starts to fall apart at Huey declares his love for Felicia and the public starts to reject him.

The performances were all quite incredible – especially the performances by Felicia Boswell (who plays Felicia) and Bryan Fenkart (Huey Calhoun). It was Boswell’s voice that truly shines through in the musical. It’s remarkably easy for the crowd to get lost in her performance as she dazzles everyone with her sensational voice. It’s always hard for me to imagine why artists with such skills are in theater and not pursuing a music career full time. That being said, it’s a good thing for musical lovers that such talent love the theater as much as we do. While the music, dancing, acting, and production design all came together for a flawless performance – it was Boswell’s voice that ultimately won me over.

It’s not hard to see why Memphis took home the Tony Award in 2010. It’s a wonderful musical with potent political commentary, great tunes, some fantastic dancing, and a decent amount of humor to top it off. Everything you and need to be entertained for the evening! You can pick up tickets for an Atlanta show from now through February 5th! They can be purchased through the FOX Theatre Box Office or online at www.ticketmaster.com!

'The Vampire Diaries' Review: Bringing Out the Dead

Bob Saget Not Narrating 'How I Met Your Mother' Series Finale