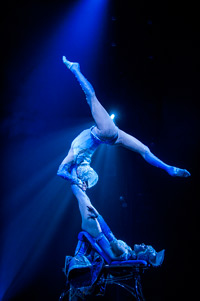 Cirque du Soleil is back in Atlanta with Totem! Totem explores the birth and evolution of the world and its inhabitants through a series of seemingly impossible acrobatic and balancing acts. Cirque du Soleil’s 28th show lives up the high caliber of performances that fans are accustomed to and leaves audiences in an almost dream-like state.

One of the most impressive elements of the show was the technology that accompanies each of the amazing routines. Throughout all of the Cirque shows that I’ve seen – the technology seems to push the boundaries a little bit further with every show. With Totem‘s projected imagery onto the stage, the environment is seamlessly transformed into a beach and with the accompanying sound effects – and inspiring music selection – the audience is transported to the magical world that Cirque always manages to create for its visitors.

There were a number of acts that left me with my mouth agape for most of the night. From incredible roller skating which included the headbanger (or as Cutting Edge fans like to call it – The Pamchenko), to amazing acts of balance and rhythm with trapeze acts, hoop dancers and unicyclists who balanced and caught bowls on their head – flung backwards or forward from each other…. Every act fit perfectly into the overall story that Totem was telling and the progression of our species since the beginning of our planet was told in a beautiful lineup of acts.

This was my seventh Cirque du Soleil show that I’ve seen. I continue to be impressed by all the various acts that seem to be humanly impossible, yet all of the performers make it seem like second nature. And I’m not the only one that feels this way. With Hollywood taking over Atlanta, a slew of celebrities have been spotted at Totem, including The Vampire Diaries star Nina Dobrev, The Walking Dead‘s Andrew Lincoln, Josh Holloway (Lost), Joe Manganiello (True Arnold Schwarzenegger just to name a few! So keep your eyes opened for stars when you go to the big tent!

Call of Duty: Black Ops 2 - Looking Into the Wii U Controllers for Multiplayer