by FanBolt
in Music, Music Interviews 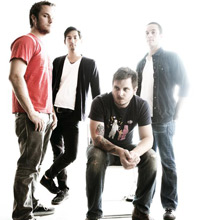 Fanbolt interviewed frontman Dustin Kensrue of Thrice about their latest masterpiece Beggars. The album was self-produced and released on independent label Vagrant Records. This is the band’s sixth album with a street date of Sept 15th.

Thrice’s last release The Alchemy Index was a series of four EPs, each representing an element of nature. For Beggars, you are going back to one cohesive, unified album.

Dustin Kensrue: We wanted the record to have certain energy to it, coming from a difference place than we’ve been before. We had ideas when we got together and we started jamming with these ideas and that’s where our cohesion took place, in the studio playing our instruments together. All of the sounds ended up melding into this sound – it was very raw.

Why did you decide to call the album Beggars?

Dustin Kensrue: I’ve had the idea for it as a song a long time ago. Martin Luther’s (theologian/founder of Lutheranism) last words were, “We are all beggars. That is true.”

I’ve been thinking about that a lot, the idea of what does it mean that we are all beggars? I think we really take a lot of things for granted. We take credit for things that we all should be thankful for instead. I really feel like it applies to all of our lives.

That was where it was coming from, so I had to say Beggars. Then I thought it would be a strong, grabbing title to make people think.

Your younger brother Chase is following in your musical footsteps with his band Eye Alaska (Fearless Records). What are your thoughts on that?

Dustin Kensrue: They’re doing their own thing, and I think it’s awesome. There’s never really been any connection. They’re definitely making their own music, having fun and working hard.

Has he asked you for musical advice?

Dustin Kensrue: They’re finding their own way and I think it’s important to pave your own way sometimes. He’ll ask me a few things from time to time, but they’re in a different position than we ever were. They’re a different kind of band. I’m not sure I even know what to tell him sometimes.

What are the stories behind some of the song lyrics?

Dustin Kensrue: The song “In Exile” is this idea of human longing for heaven. C.S. Lewis (novelist and Christian apologist) has a really interesting quote about it. He talks about every desire or need that a human being or animal has—has its satisfaction in the world. If hunger exists, then food must also exist. If tiredness exists, then sleep must also exist–all these things. So if I find that desire in myself, which has no satisfaction in this world, then the most obvious conclusion is I wasn’t made for this world. The idea of being philosophically, like, if there’s something that exists here, there must be a satisfaction for it. If it’s not here, it’s somewhere else.

It’s really interesting that your ideas come from literature.

Dustin Kensrue: I’m getting into a lot of reformation theology. There’s a song called “The Great Exchange.” It’s a term that [John] Calvin (theologian) used a lot.

It’s basically just things I read, bounce around and find something that works. I’ll usually try to let the song decide where it’s going to go. I’ll listen to it and find its natural movement, how the song is telling the story without the lyrics. Then I’ll try to match the lyrics with the dynamics.

Let’s talk about the organization Invisible Children. You’ve been doing a lot of work with them.

Dustin Kensrue: They’re trying to stop child soldiering, raising awareness. They’re trying to raise that awareness to pressure governments to stop these atrocities. There are tons of people being displaced, being killed, a lot of bad things going on. So they do a lot to raise awareness and get volunteers. They’re a great organization with great people running it.

Beggars is your sixth album, and you’ve been around the music scene for more than a decade. Do you ever fear running out of ideas?

Dustin Kensrue: Yeah, 11 years we’ve been playing. I don’t think we’ll run out of ideas. We like what we’re doing and I think we’ll keep doing it for as long as we can – having more kids and trying to work that out. It’s a hard life for a family.

Do you have a message for your fans?

Dustin Kensrue: Thanks to people who are buying the record. It’s hard with the leaks today to go out and actually buy it, but we really appreciate the people who do. The label has allowed us to make the record by loaning us money. They give us an advance and they need to recoup that. That stuff’s important so that music can continue to be made and labels can stay afloat. We really appreciate the people who buy the album.

Has it been harder for Thrice as a band in this new era of illegal downloading?

Dustin Kensrue: It’s a totally different world. It’s harder for everyone. The music industry has been hit by a hard rock. There’s new ways of doing things, which are great, but in the end people have to support bands through the way they’re able to. Otherwise, no one will be able to keep making music.