by DoubtingSalmon
in Music, Music Interviews 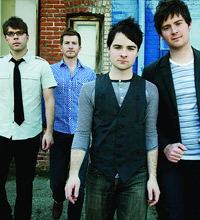 We had a chance to talk with Nathan of the band Meese. Here’s what he had to say!

How have you guys grown musically since you started as a band?

Nathan: Our sound has changed a lot since the band first started a little over 4 years ago. We used to be a lot more mellow and piano driven then we are now. We used to only have one tune where Patrick was playing guitar we had no big ‘rock-out’ moments like we do now. It was just a natural progression to play more upbeat music- it makes for more entertaining shows and I think that for the 4 of us it’s just more fun and natural to be in a rock n roll band. Evolution is good for us. I’d like to hear what we sound like 4 years from now.

How would you describe your music in three words?

When did you first start writing music?

Nathan: Patrick started writing at a really early age. Once we started to like our own music and not just what our parents were playing around the house (which was still really good music) Patrick started writing tunes. So probably 8 or 9 years old. The two of us have been writing together pretty much ever since then. Mike and Ben started writing back in high school and had a great band together right before they joined us to complete our outfit.

What bands have influenced your music? Are there any from Denver?

Nathan: We are all first and foremost fans of music. Anyone of us could nerd out over bands for hours, but as far as the ones that influence our music. Hmm… I’ve always thought we sound like a British version of Jimmy Eat World that lives in Denver. I think that Patrick is influenced by more classic songwriters- Billy Joel, Phil Collins, that sort of thing. He uses those traditional ‘guy writing a song’ standards and puts his own modern touch on them. We’re definitely not a ‘genre’ band. Sometimes I wish we were so I could just say “yeah we’re a screamo band” or “I’m in a hardcore band.” But we’re not. We all just listen to too much music to settle on one or two influences.

Was there an album that you heard growing up that really changed your life and convinced you that music was your future?

Nathan: Yes. There were a couple. The big one for me was the Blue Album by Weezer. There is not a bad track on the record. Also Vitology by Pearl Jam really hooked me. Something to Write Home About by The Get Up Kids was huge for me as well. The more I listened to them the more my mind was made up that music could be more than a hobby for me. And when I was 9 my dad bought me Led Zeppelin 4 and Have You Ever Been Experienced by Jimi Hendrix at the same time and made my brain explode.

Is there a certain message you try to convey with your music?

Nathan: Hmmm… message… I’d like to think that the songs come across as epic and cathartic and hopeful but not cheesy. We always try to write music that we personally would want to listen to. So, yeah. Whatever message that is. Our message is that we totally rock. There I like that better.

Is there a song you really enjoy playing live?

Nathan: I love ’em all. I do this for a living so that I can play music live as much as possible. But if I HAD to pick one it would probably most likely be forward motion. It usually the first song in our set and is just a great way for us to kick off a show and get in the mood. Plus my guitar part isn’t that hard in it and I can look around the audience and take everything all in. I wish I was playing it right now!

What’s been your most memorable performance to date?

Nathan: Hmm. I know you asked for one but I have two. The first is the second time we played Red Rocks with The Fray. If you’ve never seen or been to Red Rocks you have to go. It’s the best venue in North America and maybe the world. I might get in trouble for saying that, but I really don’t care. It’s freaking magical. And we played right after the sun went down and it started drizzling and the wind started picking up and I felt like I was in U2 or something. Also that was the show that got us signed to our record label. So it was really important that we played a good show and we did. And we got to do it in our hometown with our friends in front of 10,000 people.

The second one is St. Patrick’s Day at the Hi-Dive here in Denver back in 2007. A couple of months before that show we were playing with The Fray up in Vail this really cool mountain town and we made a deal with that crowd that if we sold out of CDs that night (we brought 100) that I would get the world ‘Vail’ tattooed on my butt. Sure enough we sold out of discs and since I am a man of my word I got the tattoo and our St. Patrick’s day show was billed and advertised as the ‘tattoo un-vail-ing’. We had great openers, sold out the club and at the end of the set I mooned the entire place. So I think that qualifies as pretty memorable since I’m reminded of it every day I got out of the shower.

When you’re not working on music, what are your favorite things to do? Any must see television series?

Nathan: Lately we’ve all been riding bikes. We’ve all got cool old single speeds (and some fixed gears) and Denver is one of the most biking friendly cities on the planet so we’ve been doing a lot of that… Ben and mike are expert fly fisherman. I love going to see local music around Denver, Pat and I DJ every now and again at this great club called the Larimer Lounge. Sometimes I play solo shows and Patrick drums plays in a couple of other Denver bands. Ben writes and records country music (seriously). You know, stuff like that.

As far as TV series go, I’m the only guy in the band not currently addicted to Battle Star Galactica. I don’t get it man. I love Mad Men and Breaking Bad. I think those are the best TV shows currently being made that people don’t talk about enough. Other than those we have our old standards like The Sopranos and The Office (British and American). 30 Rock is on right now in the background at my brother’s place and they just played the ‘Werewolf Bar Mitzvah’ thing which gets me every time. Oh yeah, and I’m reading the Twilight series, and I’m not embarrassed to admit. I just started the 3rd one. Sigh…

What’s next for you guys?

Nathan: We’re going to live in a 15 passenger van and get to as many cities as possible and play for as many people in those cities as possible. We cannot wait to hit the road and take our live show to the next level. We worked our asses off on this record for almost 2 years now and we know it has legs and we can’t wait to exercise them… if that makes any sense… so yeah. Next for us is a night of music with you. See ya out there.