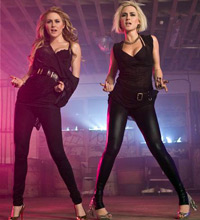 Interscope recording artists Brit & Alex are the multi-talented twins who have been tapped as the new “it” girls of pop music by producers Tricky Stewart (Rihanna’s “Umbrella,” Mary J Blige) and Dallas Austin (Gwen Stefani, Madonna).
Their sound, a refreshing blend of slinky melodies over hip-pop tracks, is the perfect blend of New York-sass-meets-London-cool.

“Let It Go,” their single and video from the movie and soundtrack Step Up 2, The Streets, is an early taste of what Brit & Alex have to offer.

So tell me a little bit about you all, what’s your background?

Brit: Basically we grew up in Connecticut. We started doing music and modeling in about 9th grade. We did the John Freida commercials, so people knew that we could sing and that it was something that we were doing. People were submitting us songs, we were trying to figure out our direction, and it wasn’t really working.

So we thought, let’s go over to London and see if we can get it right. We ended up going into the studio and finding our direction. I kept thinking we had to get over to America, you know we’re Americans, so we parted ways and headed back.

At that time, Pink’s album came out, and we’re like whoever did this is perfect for us. And it was Dallas Austin. We didn’t have any connections in the music industry, so after a while we managed to get a hold of his manager, and he took a meeting with us. We played him our songs, and he said that he would pass them along to Dallas. He said if he liked them then he’ll do it, but you know he’s done so much now that he doesn’t do anything that he doesn’t want to. It’s not about the money; you know he’s worked with Pink, Gwen, and Madonna. So we were praying that he would do it, and he agreed to it.

So long story short, we went down there and spent about two months with him. He wanted us to be his new TLC. We were in the studio every single day. We slept in the studio. So he basically did half our album and then recommended us to Tricky Stewart, who did “Umbrella” with Rhianna. So Tricky did the other half of our album which really worked well.

We wanted to feature Missy Elliot on one of our tracks, so we took a meeting with her manager Mona Scott, Violator. And she told us, “Look, I think Missy will do this, but I feel like you guys should take one last meeting with Jimmy Iovine before you guys go over to London by yourself.”

We were kind of hesitating because we’re young blond girls that are twins, which is all kind of gimmicky. We didn’t want people to think we’re straight pop girls, because we have listened to rock, R&B, and Motown all our lives. And we’ve worked so hard to sound exactly the way we wanted to, and we were afraid if we took it to a major label, they would try to package us what we look like. That was our biggest fear, but we took the meeting anyways, and he got us completely. We sang a song for him, played a couple songs for him, and he said,”You guys are at the place that took Gwen 10 years to get to, and you guys have influences from a little bit of everything.”

That was exactly what we’ve been saying. It’s not usual for all these influences to come out in one album because we’ve been listening to them all our lives. So it shouldn’t be weird for it all to be on one album in a cohesive way. He said he didn’t want to change anything, maybe just add a couple songs, so we signed and moved to LA shortly after that. We’ve been here ever since.

Now most people will probably recognize you from the John Frieda commercials. Did they let you sing on that because you all were singers or was that something you were going to have to do going into it? Was it their idea or yours?

Brit: They knew that we could sing, so they incorporated it in.

Alex: Magazines would want to interview us after that, and we were always told to try to talk in the products. We always said though that at the end of the day, we wanted to be singing. That’s what we wanted to do, and modeling was only a temporarily thing. So everyone always knew.

So music has always been your ultimate goal?

Alex: Yeah, we kind of just fell into the whole modeling thing as a fluke. We were afraid to be seen as models trying to be singers, so that’s why we stopped when we did.

Do you guys write any of your own stuff?

Brit: We started out having people write our stuff for us, and it wasn’t working. That’s why we moved over to London, trying to find our own sound. No matter how much we would tell people what our influences were, they just wouldn’t listen. They couldn’t get past the pop image. So with this album we co-wrote with Dallas, and wrote with Tricky.

Who would you guys love to work with? I know that you guys mentioned that you have Missy on a track, is there someone else that you would really love to have on one of your songs?

Alex: We love him.

Do you guys play any instruments at all?

Brit: We can both play chords on the piano, but not well enough. We took lessons when we were younger, but we stopped.

What’s your favorite song off of the album?

Alex: Mine is “Keep It A Secret”. It’s kind of “Dirty Diana” inspired [Michael Jackson]. It’s one of our more rock songs, a real powerful dramatic one, and it’s my favorite one to perform.

What has surprised you guys most about the music industry?

Brit: Probably the amount of time it takes to get to where you want to be [laughs].

Alex: Yeah, it’s definitely been an up hill battle. You think okay, we’ll get signed, record our songs, and get out there immediately, but it takes a lot more time than that. I’m glad it’s taken this long though. We’re way more prepared now than we were a few years ago.

What are your hobbies? Any favorite activities or favorite TV shows that you can’t miss?

Brit: Sex in the City, when it was on… we loved it.

Alex: I like to go to restaurants and movies.

Brit: Just hang out with our friends whenever we’re around.

What’s on your schedule right now?

Brit: Lots of press, a little bit every day. We’re also getting our band together, because we’re going to start doing shows over here [London]. We just got our choreographer here from the States, so basically those two things. We’re going to have to come back though to record.

Are you guys going to be touring in the US soon?

Brit: Yeah we will be, we’re starting here though. We put out the “Let it Go” track over here on the charts just to see what would happen. Before we even got here, it went #5 on the commercial pop dance chart. So we’re just over here trying to build momentum. Unfortunately, we’ve just both had bronchitis.

Clooney Looking For A Premiere Date

Hilton: 'I'm Not Starving Myself'