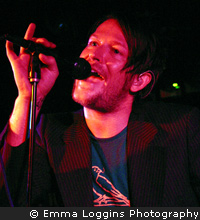 How did you guys get started?

Marsh: Jared and I started the group about 6 years ago. We meet and just decided that we wanted to write songs and try to get better at song writing and just see what it was like in a completely collaborative band atmosphere. Instead of like a guy or two guys taking it, or if you got the full band together and actually wrote like a band. You know played like a band. And just let the chips fall kind of wherever they would, and that’s where it started in Albuquerque, New Mexico.

What about the name Soular? What’s the story behind that?

Marsh: Jared actually came up with the original.

Jared: Yea, I was reading The Space Trilogy by CS Lewis and the language that all coherent beings in those books speak is called Old Solar. So we came up with the idea Solar, and just added a “u”, but that’s where it originally came from.

Marsh: Yeah it came from The Space Trilogy, because both of us had read it. And I hadn’t read it in awhile. We just talked about the trilogy.

Marsh: Yeah, you can’t call a band ‘old’ something.

Yeah probably not! I was reading a lot of your album reviews online, and I noticed that you all were compared a fair amount to The Beatles and Radiohead just to name a few, how do you feel about that?

Marsh: Those are obvious bands that we listen to. Just today, earlier today, we were talking about the greatest five bands of all time. And who is number one?

Jared: It’s a conversation we have often.

Marsh: It is. It’s a reoccurring conversation. The Beatles Led Zeppelin, Pink Floyd. Um who else did we have in there? We had U2.

Marsh: Yeah, they were in the top ten, I don’t know if they were in the top five. The Rolling Stones made the top five. But anyway, we’ve listened to music for our whole lives and we’ve been into the timelessness of music. Trying to find music that sounds timeless, and I think Radiohead is going to be one of those bands. And I think you’ll look back and say that’s a timeless band. We haven’t consciously tried to be anyone other than who we are.

Marsh: Yeah there are a lot worse bands we could be compared to.

Definitely. I also read that the themes for your songs come from personal experiences. Is there a certain song that feels the most personal?

Marsh: It’s probably different for each one of us. For me it’s actually ‘Nothing Left to Lose’, because we were at a tense moment in the studio. Everything with this band is has been so – it’s not been effortless, because we’ve worked really hard, but it’s not been really difficult as far as togetherness and working together, writing together, we’ve been very fortunate to just get along.

Marsh: Yeah very cohesive. Even two albums ago when switching guitar players, it ended up being a cohesive thing. Chris was on ‘Time and Space’ and our first record, and Brian has been on the last two. Having a little bit of tension, we were pretty isolated when we recorded parts of ‘Love Crash Heal’, and so we got a little bit stir-crazy. It was a day when we liked the song idea but we didn’t like the style. We tried to put some of the Americano, and the song is just about trying to make it as an artist in any way, shape, or form. So it’s kind of a life story. And relationships, when you have a band, are not easy. You have to be gone to be successful, and if you’re successful you have to be gone. So it’s difficult. It’s a song about the difficulty and the love of doing whatever you love to do.

What about the song ‘American Dream’? What’s the story behind that one?

Marsh: It’s a song about the materialism that is in all of us that we hate. We all have those things that we hate about in other people, and it’s usually because you find it in yourself. We all have these things that we point out in other people that are the things we have in ourselves. It’s kind of the irony that we’re told to chase after this dream, life, liberty, the pursuit of happiness. And yet the more you chase after, the less happy you can be. It’s like the thing that you like and hate about the American dream, whatever that may be to you is the thing that makes you keep pursuing it and yet, sometimes, keep hating it.

What’s a typical tour day like for you guys?

Marsh: Driving, setting up, playing, talking, um.. driving. The other day we had a rare day off and we went to the beach. It was our last day in Florida. So we had a great, but typically it’s driving, sleeping till they kick you out of a hotel, driving until you have to be there for the next load-in, playing, sticking around for the rest of the night, and meeting people.

Jared: Especially being in the part of the country that we live in, everything is kind of isolated. Albuquerque is super isolated, so to get anywhere is a long drive.

How would you describe the growth between your albums?

Marsh: I think we’re more confident in who we are collectively too then we have been. I think ‘Time and Space’ helped us figure out who we are verses what we think we are. You do a record, and that’s who you are. It’s captured. I think the other albums since then have just built on that. We feel like we’re just starting to tap into this well of us collectively which is a really cool thing. We’re all talking about the next album. We want to continue to write and test songs on the road. I think we’re growing into who we are. We’re comfortable with whatever brings to the band, and playing to the strengths that everyone brings, and you try to find the weaknesses that each person has and try to build those up. Because being authentic for usâ€¦ this is a day and age where there’s so much emphasis on image. There are bands being forced a lot of times to be an image. They think image is the thing that is going to ultimately sell. Image isn’t unimportant, but the thing that people will remember is your songs. So if we can better at writing songs then we’re improving, and we’re having fun.

What is your opinion on the record industry today?

Marsh: I think there is a lot of confusion. The good thing is that the playing field is leveled for everyone in some sense. Obviously, there are bands that have tons of money. Their labels have tons of money, but that doesn’t necessary mean they’re in a better position. We spent a lot of time doing things independently without a label, and then just this last we decided to go with a label. But we went with a label that would let us continue to be who we are. They didn’t come in and micro-manage our record, we used our artists, our engineers, and our producer friend. It’s all what we wanted to do. Music takes time. And if it’s good, then it will stand the test of time. I think that the state of the music industry is all about instant success right now, and it shouldn’t be. I think it’s going to have to go back to developing art, back to letting it have a place to grow and thrive. Eventually that’s going to be the only thing that sells. Record sales keep going down and down, but people still want good music. The demand for good art and good music is greater, because when you find something that inspires you, makes you feel a certain way, or comes across in a genuine wayâ€¦ people are moved by that, and they want more of that. So I think things that are real are going to come forward. It may not be huge, like we’ll never have another Beatles, but we’ll have whatever we have. There are lots of great artists out there right now, doing their thing in a real and authentic way, and we want to be part of that.

Do you guys have any advice for other bands trying to make it?

Marsh: Be realistic. We worked on our hometown for a really long time. You don’t neglect you’re hometown.

Jared: Which doesn’t mean don’t get out there and play other places, but don’t neglect where you are from.

Marsh: Right. And everyone has a region, so just play your region.

Ian: And don’t expect anything to come to you.

Jared: You can’t just stay at home forever and expect a record deal to fall in your lapâ€¦ Unless you live in LA (laughs). You have to go out and work it and build fans.

Marsh: And a record deal isn’t what everyone thinks. Everyone thinks that you get a record deal that life is awesome. You get a record deal, and that just means the work is beginning. You hopefully get time to not work six jobs plus your band. I think that for bands need to realize that no one has ever arrived, and even with the great bands we mentioned before… The Beatles, Led Zeppelin â€¦These bands didn’t stop. They weren’t content with where they were. They wanted to move forward. The moment you stop being that way, trying to grow and get out there and learn, that’s the moment you shrivel up and you’re not relevant anymore.

What’s next on the horizon for you guys?

Marsh: Pretty much touring. We just released a video that is going to start getting promoted soon. We just started some radio stuff a couple weeks ago. Just you know, getting out there in front of people. Right now especially in our regions, but we’re going to cover the country.

Jared: Being that we just released our album. So we’re just developing that album. What’s good about the label that we’re on, they’re really into developing the bands. If that means you have to work an album a little bit longer to get people to hear it, then that’s what they’re going to do. They’re not just going to throw an album out there and see if it sticks, and if it doesn’t you’re back in the studio recording another and then throwing it out there to see if it sticks. We’re going to be working on touring and getting this album out there for at least the next year or so.

Marsh: And we’ll continue writing too. But it won’t be like you have to go into the studio and write. It will be coming up with ideas and trying new songs on the road.

Jared: Or whenever you have a couple days off, getting together and trying new things.

Marsh: Yeah, listen to each other’s stuff. Even stuff that we do at soundcheck that we think is cool. So it’s kind of inspired in the moment, I think that’s the best way to do any kind of art.

Interview: Jason Salfi from Big Ideas for a Small Planet