Interview: Duddy from ‘The Dirty Heads’ 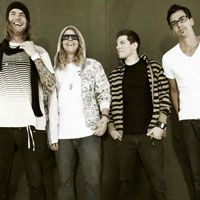 We had the chance to talk with Duddy from the Southern California reggae-rock band, The Dirty Heads. He gave us some insight into his favorite parts of songwriting, what its like to hear yourself on the radio, and what he likes to do in his free time.

If you had to describe your sound in three words, what would they be?

How did you react when you heard you were named one of the “Best New Bands of 2010” by Rolling Stone?

Duddy: I think I was more shocked, anyone who’s ever been in a band has dreamed about getting a write up in Rolling Stone and to be named one of the best new bands. It’s pretty crazy.

How do you keep your beachy/relaxed vibe when you’re on the road touring?

Duddy: I carry sand around in my pockets at all times.

I read you got your name from an incident where you were stealing alcohol from a store. Were you all rebellious when you were younger?

Duddy: We actually got our name from are older brothers and friends just calling us that. Jared ended up using it in a song we wrote before we had a name for our band and it just kind of stuck.

What has been the most surreal moment of your career so far?

Duddy: I would have to say hearing myself on the radio, it still feels weird every time I hear it.

What do you find is the best part of writing and producing your music?

Duddy: The freedom to do what you like. At the same time trying new things.

What do you like to do when you get down time?

If you had to describe all your fellow band members in one word, what would it be?