Katy Perry Is Number One 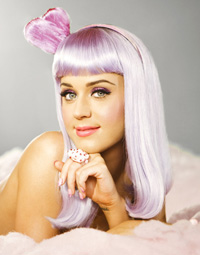 Katy Perry has cemented her status as a best-selling pop superstar with her second studio album Teenage Dream, which debuted at No. 1 on Billboard’s Top 200 Albums chart, scanning 192,222 units in its first week of release. Katy is now one of the top 10 artists with the best-selling debuts of the year and one of only two pop artists to appear on this list. Teenage Dream is the two-time Grammy Award nominee’s highest album chart bow yet. Katy’s debut album, One of the Boys, scanned 46,767 units in its first week.

Katy has now achieved the highest pre-album street date track sales of all time, with 4.4 million digital tracks sold prior to the album’s release — setting a Nielsen Soundscan-era record. 445,746 total tracks were sold during Teenage Dream’s first week of release. In addition, with the Top 5 chart positions of the album’s first two singles, the six-week No. 1 “California Gurls” and “Teenage Dream,” Katy has become one of only ten female artists in history to have two songs in the Top 5 on the Billboard Hot 100 at the same time. Currently Katy has 12 songs charting on the Soundscan Current Digital Tracks chart simultaneously including Teenage Dream album tracks “Firework”, “Peacock” and “Last Friday Night (T.G.I.F)”.

Katy is a pioneer in the new world order of pop superstardom, where success is measured not just by album sales, but also by sales of digital singles, ringtones, and music videos (clips for both “Teenage Dream” and “California Gurls” have remained in the iTunes Top 10 Music Videos chart for weeks). Measured in “TEA”’s (industry parlance for “track equivalent albums,” in which the sale of 10 digital singles is counted as the sale of one album), Teenage Dream, plus individual tracks sold, totals the equivalent of nearly 720,000 albums sold by the end of Katy’s first week. This follows on the heels of One of the Boys, which has sold five million copies worldwide.

Teenage Dream has easily averted the sophomore slump, with MTV.com opining that it is “the best second effort in pop music history.” USA Today raves that “the ambitious brunette serves up percolating confections laced with saucy humor and disarming earnestness,” while Rolling Stone has called Teenage Dream a “pool-party pop gem.” The New York Post declares Teenage Dream “a total success” that “may have the juice to topple Michael Jackson’s Bad as the U.S. record holder for most singles released from one album.”

The Santa Barbara, CA-born Katy performed on The Late Show With David Letterman and The Today Show’s Summer Concert Series during Teenage Dream’s release week and recently co-hosted the 2010 Teen Choice Awards with the male cast of Glee. She has appeared on the covers of dozens of publications, including recent issues of Rolling Stone, Seventeen, Q, Billboard, the New York Times’ Arts & Leisure section, and USAToday’s Life section. Katy has been nominated for two 2010 MTV Video Music Awards for “California Gurls” (“Best Female Video” and “Best Pop Video”) and became a portrait subject for renowned contemporary artist Will Cotton, whose confectionary landscape painting of her graces the cover of Teenage Dream.

'Kick-Ass' Sequel In The Works