by SuperMommy
in Music, Music News 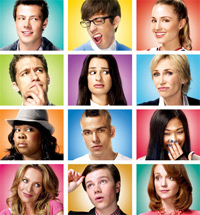 The cast of Fox’s hit musical comedy Glee has added a Black Eyed Peas hip-hop track to their lineup of songs for the back half of season two!

“We’re doing a Black Eyed Peas song right now! We’ve been begging [executive producer] Ryan [Murphy] for such a long time to do one of their songs, and we finally just got one!”

But does Peas lead singer Fergie return the Glee cast’s love? Are the Peas themselves actually appearing on the show? When Fergie was asked if she was a Gleek, the star said: “Yes [I’m a fan of Glee]! I would love to do a [Black Eyed Peas] episode of Glee! And I would love to see them perform a song by us!

Glee lead Lea Michele was recently honored along with Fergie and Jazmine Sullivan at the 2010 Billboard Women in Music Awards in New York City this past Friday. Lea says on the subject that she is “going to do my best to get a guest gig for Fergie and the rest of the Peas”, and also said “Oh my god! I’ll tell Ryan Murphy for sure! I’m going to definitely tell him that she needs to be on the show!”

As for the Billboard award itself, Lea was nothing but grateful, saying, “Everybody at Glee — we work really hard, singing and dancing and all of that — I’ve been working for a long time in musical theater and everything, so this award really just makes me feel so much like hard work is paying off.”

However, it was recently reported that all that hard work demanded of Glee means that it might be a while before we are lucky enough to get a Lea Michele record. When asked if she has any plans to record an album separate for the four Glee cast albums currently available in stores, she said, “I really look forward to putting out an album but I really want to make sure I have a really good amount of time. Glee is like my baby, and I still feel like I have a newborn at home, and I’m not ready to have another baby yet.”