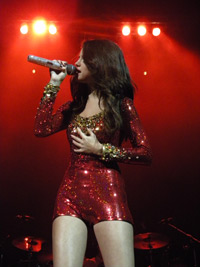 The Holiday season is upon us, and along with decorations, gifts and parties, come radio shows. Every major station has one. Usually they feature stacked line ups that gives radio listeners a great way to see all their favorite performers at a discounted rate. This year has been no different. Movin’ 99.7 put on their second annual Triple Ho Show. The concert featured Breathe Carolina, LMFAO, Gym Class Heroes, Flo Rida, Selena Gomez, Taio Cruz and Pitbull. The arena was near capacity as the star studded night began.

Pitbull was the official head liner but the age group was very Disney. So was the attire. Many fans showed up adorned in Selena Gomez merch. The mood of the night was very relaxed and the screams came to a decibel level that’s indescribable when Gomez finally hit the stage.

Although most of the shrill voices were directed at Justin Beiber’s current partner, the audience also got very loud for the Gym Class Heroes and front man Travie McCoy. A band which has been bringing their very own brand of music to audiences for years has been steadily gaining more notoriety.

McCoy is made for the spotlight. He’s about as tall as an NBA player and sports dozens of tattoos. “Girlfriend,” was among the hit records performed. But their new single “Ass Back Home,” was the most solid performance of the set with help from Neon Hitch, another up and coming artist, who appeared on the track that’s taken over Movin’s airwaves.

Taio Cruz could probably sleep walk through what is becoming a standard radio set. The hit maker has too many catchy made-for-radio songs to count. “Dynamite,” being the most recognizable. Cruz has been on nearly every radio bill this Holiday season and will be coming back to San Jose to perform on the same stage for a different station a mere four days after his Triple Ho Show appearance. Cruz flew through a thirty minute performance that had the audience on their feet and singing along.

The biggest buzz of the night wasn’t for Mr. 305, Pitbull. It was for Gomez. The pop sensation is quickly earning her stripes on the tour circuit. She isn’t a headliner yet. Her voice isn’t the strongest, her back up singers do most of the heavy lifting vocally, but she is captivating on stage. She knows how to work an audience. And the young fans love her.

All that aside, the music is actually solid. It does appeal to the younger faction of music fans, maybe even those who buy her album with their mother’s credit card. But it seems Gomez is talented enough to break through to a more mature fans. Decked out in Christmas red, Gomez thanked the massive crowd. The gracious star waved at a few tiny fans clinging to the front of the stage. That simple wave elicited tears from the screaming girls. Which gave Movin’ 99.7 yet another reason to bring back what is quickly becoming a holiday tradition next year.

Cavalia's 'Odysseo' Review: An Evening Of Amazement Awaits You

Amy Acker Joining 'Once Upon A Time'