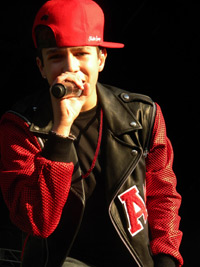 Justin Bieber may have some competition. Austin Mahone was among the performers at Northern California’s hit radio station Movin’ 99.7’s Summer Splash. An influx of teenage girls nearly crashed the gates at Great America to get prime seating in the intimate amphitheater that sits in the middle of the amusement park. It was difficult to hear the screams of roller coaster riders over the screams of the fans. Cher Lloyd, Marina and the Diamonds, Sean Kingston and Chris Renee joined the up-and-coming teen heart throb at the summer celebration.

If you haven’t purchased Marina and the Diamonds new album “Electra Heart” yet; do it now. The polarizing lead singer took center stage and put on a memorable set. The audience was on their feet screaming, but that wasn’t the greatest barometer of how the artist was doing, considering they were injuring ear drums the entire afternoon. The DJ even got a standing O.

The cheers were well deserved for Marina though. Her melodies are unique, her voice spot on and she owned the stage. She put on a musically solid set but made sure there were some entertaining theatrics in there as well. This is an act not to be missed.

Sean Kingston has a staggering number of hits. The recognizable stream of catchy music kept his set moving quickly. Kingston had the audience bobbing their collective heads with the help of his numerous club bangers. He was sans a dance crew behind him, which is expected with an act like his. But he didn’t need one. His song book and seasoned demeanor took over the performance and left the crowd satisfied.

If Justin Bieber is ever in need of a stunt double, Austin Mahone could do the job. Decked out in a snap back hat and matching high top shoes, skinny jeans and a red diamond necklace that shimmered in the afternoon sun, Mahone went to work crooning songs that have radio hits written all over them. This kid looks the part, can actually sing and had a few hundred screaming girls ready to jump the barricade that separated them from their new biggest crush.

After Mahone left the stage the audience was completely out of control. They were screaming for photographers, roadies and even the Great America security staff. Cher Lloyd had a good room, to say the least. Ever since the 19-year-old pop star released the mega hit “Want U Back,” her fame rose dramatically. That was evident back stage at her meet and greet as scores of young girls left in tears after their photo opp. The song has taken over Movin’s airwaves and these kids wanted to hear it. After a few numbers, she obliged, and ended the afternoon on a perfect note.

Halo 4 Prelude Trailer Gives You A Look Inside 343i

Get Excited For The Ultimate Bond Experience With 'Bond 50'