I profess a certain fondness (okay, a big fondness) for games that have you exploring dungeons. It’s the kind of setting that’s just always appealed to me on a basic level – this is the sort of place where you fight monsters, find treasures, and avoid traps after all. It’s also a fairly common place to toss a few friends when they decide to sit around a table and have a few laughs. Dungeon Roll is a little different, though. It takes the core concepts of fighting monsters, gathering loot, finding items, facing dragons, and moving on to lower floors where things are even tougher and compresses it all down to 15 dice. And it does it all so well.

Dungeon Roll is designed for anywhere between one and four players. Mileage varies based on how many people are playing but an average game usually doesn’t last longer than maybe a half hour to 45 minutes. The rather neat and tidy box, cleverly shaped like a treasure chest no less, easily houses all the necessary components: 60 tokens split between experience counters and treasure items, eight hero cards (with another 8 available through a separate expansion pack), an instruction booklet, a guide to the different hero cards, four “cheat sheet” cards, and 15 custom dice. 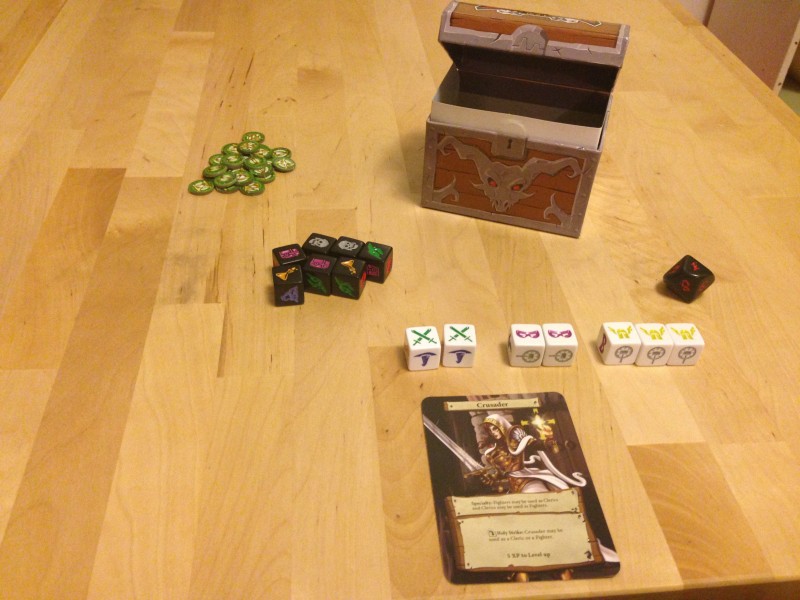 Playing Dungeon Roll does involve some strategy, but mostly it’s all about rolling dice. You’ll be picking a hero first; each of which has a Novice side with various special moves and a “once per delve” Ultimate Ability, and a Master side with improved specials and Ultimates. The seven white dice signify your party, and you’ll roll all of them before each delve. The seven black dice are the dungeon dice, and the opposing player(s) will roll them for you to determine what monsters you’ll face and what treasures you may find. As for the big ol’ ten-sider, that’s the dungeon floor counter. Each floor signifies how many dungeon dice need to be rolled and how much experience you’ll gain if you complete it and head back to town. Of course if you move to the next floor and can’t defeat all the monsters, you fail and have to run back to town empty-handed (i.e. no experience).

Each hero may slay any single monster of any type but a single hero (green warriors and green goblins, grey clerics and grey skeletons, etc) may destroy any number of creatures of a matching color, or open any number of chests if it’s a thief. So it’s good to have a decent spread when you first set out. There’s a bit more to it, of course. Champions – the yellow guys with the winged helmets – act as wild cards and can stand in for any hero class and destroy any number of matched monsters/open chests. Scrolls mix things up even further by allowing you to re-roll any number of active dungeon and/or party dice. 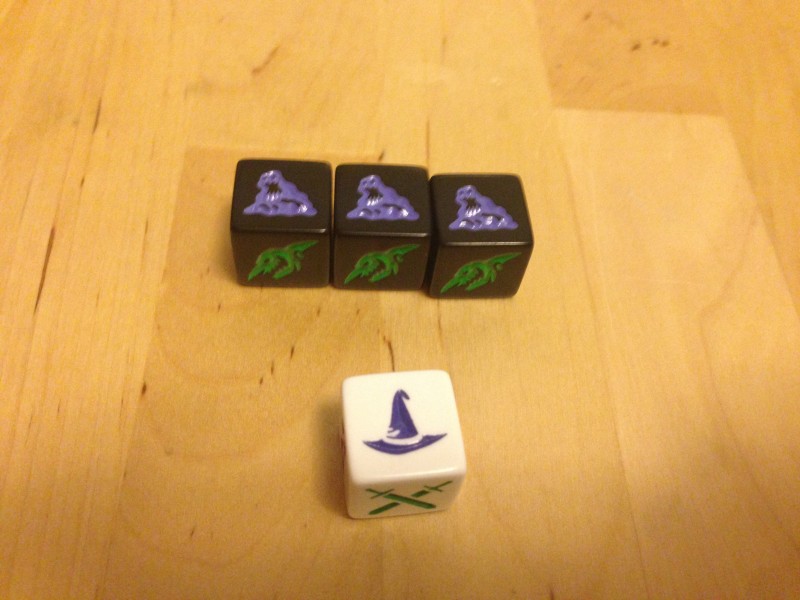 On the dungeon dice side of things there are also dragons and potions. Potions may be quaffed (yes, “quaffed,” that’s what it says in the rulebook) in any quantity by any single hero or scroll, and each potion quaffed allows you to recover the same number of dice from your graveyard and set them to whatever side you choose. Dragons do nothing. Until you collect three of them, that is. Then you’ll have to face a dragon using a set of three completely different heroes – and no, three champions don’t count. Kill it and you gain a bonus experience point and a treasure item. Fail and you’re out of luck. Back to town with you, loser! And so it goes until every player has gone on a total of three delves.

I can’t help but love Dungeon Roll. It’s compact, quick to play, super-easy to learn, and there’s such an unexpected amount of strategy to it all! Like, do you push your luck and go on to the sixth floor with only two heroes and a scroll, hoping you can use the scroll for some sort of damage control? Do you use your last warrior on a skeleton and simply hope you don’t run into several goblins when you continue on? Or maybe you could purposely go beyond your limits with the intention of using your character’s special ability to prevent any catastrophic losses? It’s a heck of a lot to ask out of 15 dice, but they perform their job admirably.