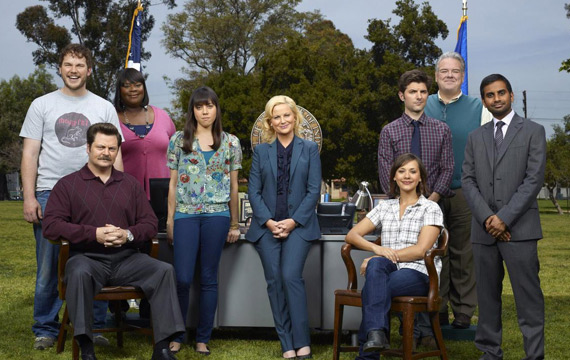 Being a show somewhat embedded in the political process, Parks and Recreation sometimes gets a chance to tackle the stories of the day. But usually, by the time the episode airs, what may be a funny confluence of our real nation and fake Pawnee can feel a little like sugar rot.

Until now! Though Mayor Michael Bloomberg’s plan to tax big sodas in New York was brought up months ago, it finally passed not two weeks ago, which makes tonight’s episode really on the nose…or the gut. See, Pawnee’s Restaurant Association is fighting Leslie’s first bill: a tax on massive soda consumption in America’s fourth-most obese town. Lovely fast food establishments such as Paunch Burger—Susie’s Salads was run out of town years ago—have introduced new “Regular” and “Child” size drinks that are the size of a gallon and a liquified two-year-old, respectively. (You could always get the smaller Lil’ Swallow, but it’s the size of a Dixie cup.) An attempt at denouement before the vote between the two parties ends in failure, though both sides had great props: a multi-gallon cup that Leslie could fit her head in, and a tub of sugar from Ann that proved way too tempting.

It’s not just the corporations who are angry; a rowdy and divided Pawnee take Leslie to task in a town hall meeting. These are always some of my favorite moments in Parks. The insanity of the townspeople can make for some great humor. Not to mention, a tax joke slipped its way into the town hall that unknowingly lets the show go two for two in topic comedy. (What might not have been as obvious when writing the show in early summer jumped out at me more based on the current electorate.)

To console herself, Leslie downs a 128-oz drink, but loses it—literally—at the vote. A scene with Ron giving her advice really showed the camaraderie between Swanson and Knope, and revealed that her perkiness almost got her fired in the early days. But of course, the real moral was as saccharine as a 64-oz Sugar Splash, and Leslie is gifted a “moral compass” of sorts. In the end, the tax passes, and Leslie may be in for a rough ride as layoffs proceed at Indiana’s burger joints.

That’s not to say the B and C stories weren’t worth mentioning. In fact, they were pretty strong. Ben and April are still in exile in DC, and the campaign interns are giving Ben some problems. Not only do they not care, but they’re totally not being serious with their font usage. (I’m sensing a font joke theme on NBC last night.) When Ben goes to fire some of them after a drawing of Ben with a stick in a painful place turns up, he finds out that every one of them is connected to a political bigwig.

So of course, Ben being Ben, he overcorrects. Hilariously. He buys pizza for the office, rhymes “‘za” with “brah”, and then initiates a morning Ultimate Frisbee game to raise his standing with jockey intern Ellis. Out on the field, he spouts even more faux-bro catchphrases, only to come back and see another doodle, which it turns out was actually done by April. Whom everyone thinks is his daughter. Whoops.

Meanwhile, back in Pawnee, Andy is training to be a cop, and his goal this week is to run two miles in 25 minutes. (“That’s a typo, right?”) Chris and Tom agree to train Andy, and so the physical comedy Chris Pratt is so good at makes the story fun. Though the retread of Chris’ athletic depression makes me as sad as he is. Hopefully mandated therapy will lead to some fun plots as the season progresses.

With a couple conflicts drawn as the season has rolled out, it’s shaping up to be a great time to be in Pawnee, criminally passed over Emmy nods and ok-for-NBC ratings be damned! Someone get me a #2 bacon burger with hash browns to quell the pain!

Line Item Vetos
– “I’m never going to be a cop, I’m going to have to be a robber.”
– “If you want zero calorie water, try Diet Zero Water Lite. It has 60 calories.”
– “If we put a tax on soda, what’s next? Income?”
– There’s a copy of Pawnee: The Greatest Town in America on Ben’s shelf!

McKayla Maroney To Guest Star On 'Hart Of Dixie'